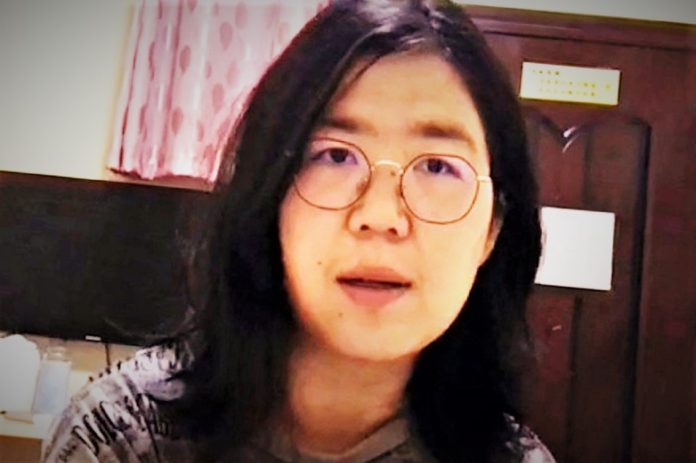 Zhang Zang, the citizen journalist is jailed for 4 years. She reported the coronavirus pandemic in Wuhan earlier this year during the initial break out of the virus.

Shanghai Pudong New Area People Court found her guilty of picking quarrels and provoking trouble. This is mostly a clause used by the police to stifle dissent.

Her lawyer, Zhang Keke, told she attended the trial in a wheelchair is in quite poor health.

Her lawyer said that,

“[During the trial] the prosecutor only read out the list of evidence, without showing most of it, including the core evidence. Zhang Zhan said citizen’s speech should not be censored. But apart from that, she basically did not speak,” on Social Media, reported South China Morning Post.

Zhang was reporting the pandemic from Wuhan. However, soon after in Mid-may she went missing. The Police later confirmed that she has been put under detention.

Zhang Zang protested against her detention and maintained her innocence. In fact, she protested by going on a hunger strike.

Initially, she was detained for spreading lies. Many others who reported pandemic from Wuhan were either arrested or forced to stop reporting. Dozens of supporters came outside the court to support Zhang but expectedly chased away by the Police.

SCMP reported that a woman who came from Wuhan in support of Zhang said,

“We were full of fears about the virus and the future during the Wuhan lockdown, so we thanked Zhang Zhan for arriving in Wuhan. So brave. I heard that she bought a train ticket to Chongqing and got off in Wuhan, just alone.”

It is not immediately clear whether she appeals against the verdict. However, the Chinese Communist Party would be up against her for exposing their lies.