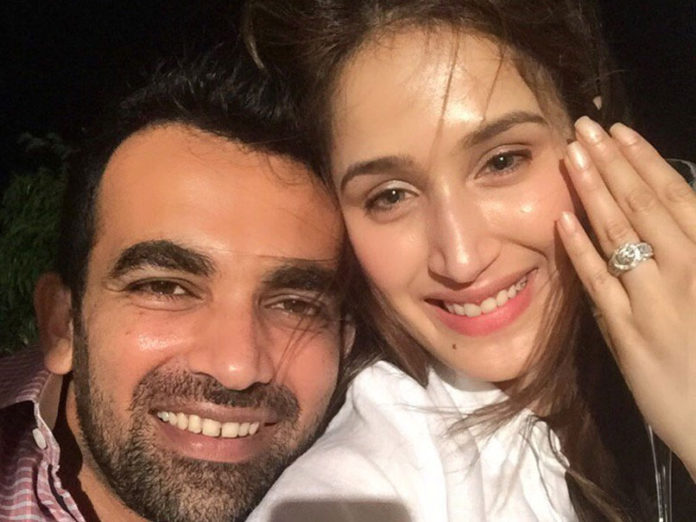 Zaheer Khan Sagarika Ghatge Engagement is breaking the internet today. The former Indian Fast Bowler and the actress decided to public their relationship after maintaining secrecy for a long time. The love birds were seen together for a long time and it has been widely reported that they are seeing each other. However, they never disclosed the same.

Never laugh at your wife's choices. You are one of them !!! Partners for life. #engaged @sagarikavghatge pic.twitter.com/rUOtObFhiX

Today, Zaheer Khan took the Twitter to break the news of his engagement to Chak De Girl Sagarika Ghatge. The Delhi Daredevils Captain looked extremely excited about his next innings and Sagarika was full of joy as she flaunted her Engagement Ring. Yuvraj Singh has never remained silent neither on the field nor off the field. So, he decided to wish the couple with a perfect wish. “Welcome to the Other Side”, this is the best message one married friend can give to his friend on engagement. Interestingly, the fume of their relationship became even clearer since the engagement and marriage of Yuvraj Singh and Hazel Keith. Zaheer Khan Sagarika Ghatge pair at the wedding ceremony stole the show along with Virat Kohli Anushka Sharma. Sagarika was even spotted during the Delhi Daredevil matches.

Welcome to the other side fella hope it's always bright for both of u many congrats and very happy for you guys @ImZaheer @sagarikavghatge pic.twitter.com/79r1fPDvoM

Zaheer Khan has retired from International Cricket and is playing for IPL. He is captaining and the mentoring the Delhi Daredevils team. It is believed that this would be his last season as a player in the IPL too and he may become a Mentor for the team from next season. Sagarika Ghatge meanwhile continues to work on her Filmy Career that has seen quite a few downs in recent time.

The Asian Herald Team congratulates the beautiful couple a very happy and new journey ahead.

Sridevi Death – Procedure before transferring her mortal remains to India