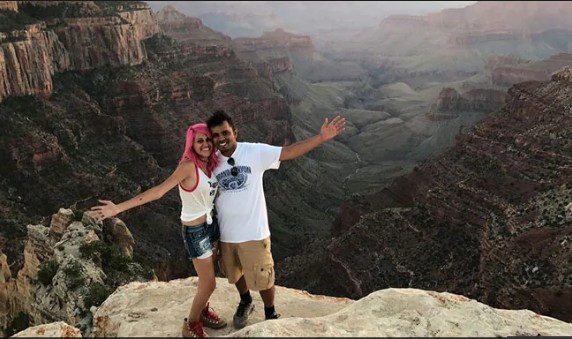 Yosemite Park is otherwise known for the spectacular view and scenic beauty. However, it wasn’t the same for the “Dream Doers Duo”. The Indian origin couple fell from the cliff and went down to as deep as 800 feet to meet their unfortunate end. Vishnu Vishwanath and Meenakshi Moorthy were happily married couple and known for their travel enthusiasm. They had a travel blogging website and their social media was flooded with photos from all over the world. However, the last trip to Yosemite Park in California became their last.

They fell mysteriously from the cliff at the park which is a popular tourist spot. The authorities are not sure the exact reasons behind the fall but the investigations are currently underway and it may take several weeks before a conclusion can be drawn. The bodies of the couple have been recovered. It is being suspected that they might have slipped from the cliff and in order to save each other, both might have fallen.

Vishnu and Meenakshi were living in the United States and ran a travel website called “Holidays and Happily Ever Afters.” They travelled to a lot of places in the world and shared their experiences on their blogging website.

As per the local reports the couple recently moved from New York to San Jose after Vishnu took a job as System Engineer in Cisco. They were probably on a trip to California as usual. It is not exactly clear what they were doing during the time of the accident.

So far, no foul play is sensed and it is being investigated as an accident. However, further investigation may fetch more details.