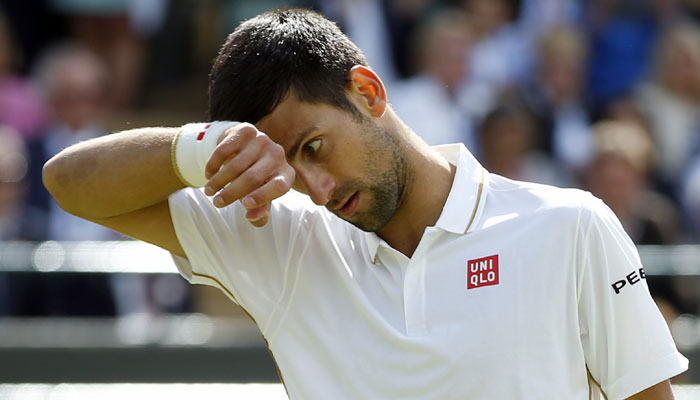 Three Times Champion of Wimbledon, Novak Djokovic crashed out of the tournament after 41st ranked Sam Querrey defeated him. Djokovic was eying for a record third consecutive Wimbledon Grand slam but it was crushed by the young American player. Novak Djokovic has won last 30 grand slam matches and this defeat can be considered as one of the biggest upset of the modern era of Tennis.

Novak Djokovic faced straight defeats in the first two sets against Sam Querrey. However, the World No 1 Tennis Player was quick to come back in the third set and won it within 33 minutes. Just before someone would have thought that Djokovic is going to make it again, Sam fought it out in the court and defeated Djokovic in the fourth set after 1 hour 17 minutes. There were very few in the court who would have thought that Djokovic would be crashed out of Wimbledon 2016 even before the quarter-finals or the Round of 16.

As big of a blow it was for Novak Djokovic, for players like Sam Querrey, this would go down as one of his biggest achievements to date and can prove that anyone can beat the higher seeds if they put in the practice. He probably asked himself, “what is my tennis rating” before the start of his professional career so that he could train and be coached alongside people who were of a similar ability to him. This could have helped him to get where he is today and as a result, is now proceeding to Round 4 of the Wimbledon Championships.

If the record of Novak is reiterated, then his record for Wimbledon has been outstanding. In the last eight years, he has qualified for the Quarter Finals each time in Seven Wimbledon Grand Slams. He last lost to Marat Safin in 2008 before the Round of 16 in Wimbledon. If the grand slam record is checked, then he has reached last eight in every grand slam he has played since French Open 2009. Overall, the record stands for 28 grand slams.

If you follow all the biggest sporting events in tennis then you may want to make your favorite sport just that bit more exciting. Take a look at Fanduel, the sports betting platform that lets you raise the stakes of the top matches in tennis!

Irfan Pathan Shows Trollers who is the King of Swing