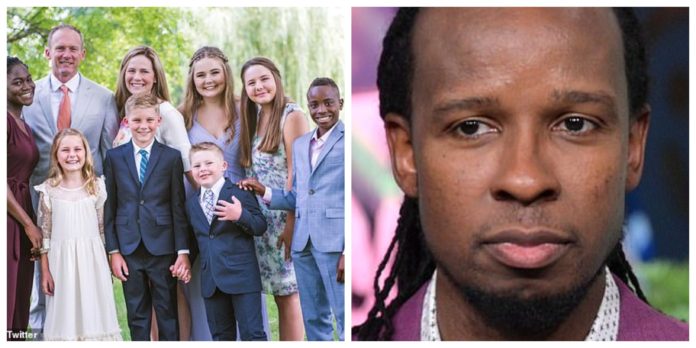 White colonizer if the black kids are adopted, that is what a Boston University professor thinks. Ibram X Kendi, a Boston University Professor accused Amy Berrett, the Supreme Court nominee as White Colonizer. He said that as she posed with her adopted Black kids and cut the biological parents.

Kendi wrote on Twitter that some White Colonizer adopted black children. He went on to write that they civilized the savage children in superior ways of white people. He also accused her of using the children as props.

However, he goofed up. The Twitter users pointed out that Kendi was referring to a photo that included Berrett’s sister holding children who were not adopted by the judge.

He however reacted and said that he is challenging to the idea that some people have. He said the idea is that white people cannot be racist if they have adopted black children. He termed it as propaganda.

He has faced online backlash after the tweet. Many have called him not worthy of being a Boston University Professor. There are demands to fire him from the university as well.

Are you suggesting that any white family who adopts black children are colonizers and that interracial adoption is somehow evil? Please clarify because if this is your position, it’s an evil one.’

Many black people who were adopted by the white, came hard at him, and discarded his logic. Many asked him to refrain from generalization.

Amy Coney Berrett has seven children. Five of them are biological and two are adopted from Haiti. Her youngest child also has Down Syndrome.