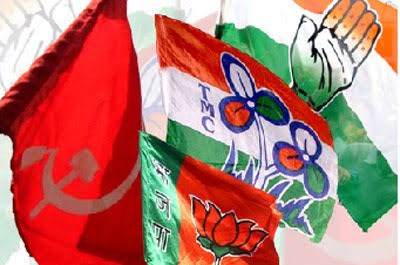 Mamata Banerjee is back in power and this time with more majority. The performance of the party has been phenomenal despite many controversies and scams. Even the political alliance of Left and Congress could not really controlled the Mamata Storm.

All Indian Trinmool Congress has expectedly grabbed the initial leads in the WB polls. The Election Results of West Bengal clearly shows that TMC is going good at this stage leaving behind the others. Even though it is too early to take a call, but as we cover the West Bengal Assembly Election Result Live, it will become more evident.

TMC is set to return in West Bengal after huge lead in early trends. However, the most surprising fact of WB Polls is that CPM is almost vanishing from the State Politics. Currently it is in third list and may well finish around 30 seats. Indian National Congress has never been stupendous in recent elections but they can draw some confidence from the second position in the Elections.

If the trend  continues then Mamata Banerjee would come back as the Chief Minister of West Bengal for the second term.

BJP has focused on WB Polls but the results will not please the party. They are now leading less than 10 seats and that may remain the number of seats for them at the end of the day.

West Bengal Assembly Election Results would require 149 seats for a party to claim the government.