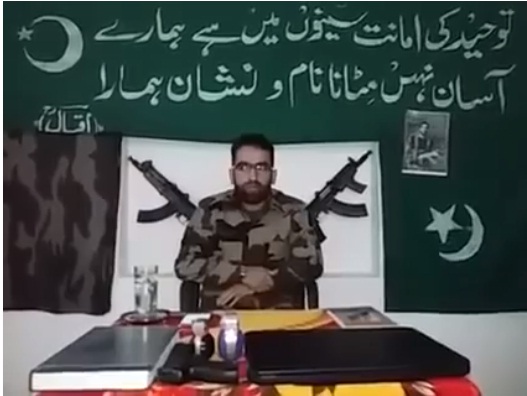 Hizbul Mujahideen new video says that they will destroy India like we killed Promogh Kumar on Independence Day. The Hizbul Commander said that they have forcefully occupied Kashmir and we will die and destroy India.

The commander said that he sympathizes the daughter of Promogh Kumar but we had to do to attain freedom. He also said they will welcome the Kashmiri Pandits and Sikhs. He said that it was a conspiracy of India. This is the first video released after their commander Burhan Wani. He said that the death of Burhan Wani has given a new dimension to the freedom.

Here is the video

He threatened the Police that if they do duty, they will die. He said they must remain at home. The Hizbul commander said that only Muslims gave them freedom. His views were more Islamic than anything else. The commander said in Hizbul Mujahideen new video that they would fight against the Indian forces and if necessary they would die.

He said that India cannot keep Kashmir and they will kill each and everyone who comes on their way. He also said that they are not terrorists and India is not a democracy. However, his messages for killing and destruction never showed any sympathy to anyone.

Ankit Saxena Murder Case – What can make you angry and...