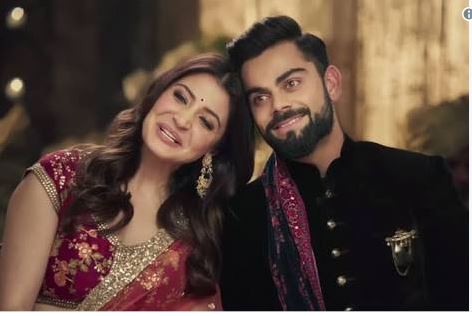 Virat Kohli Anushka Sharma Marriage became a trending news on the social media thanks to the fans. The rumours started in November this year but this time it has, in fact, went farther. The rumours say that the marriage is scheduled on December 11,12 & 13 and the location would be Italy. Few even commented that the location is Venice to be precise and the couple would be flying tomorrow. Well, does that sound every detail? In fact, it does but how much truth is there?

Anushka Sharma’s Manager has rubbished all the reports and denied of any such development. Virat Kohli Anushka Sharma Marriage has no reality to back as per the close sources to the couple as well. However, the fans are going crazy at the news. A similar thing happened when Virat Kohli and Anushka Sharma were spotted in a Temple and the news spread that the couple got secretly engaged. The rumours started after Virat and Anushka came together for a Manyavar Advertisement that shows both taking modern day marriage vows. After Virat applied for leave from the on-going Sri Lanka series, fans almost became certain.

Now, that you know the truth, stop believing the rumours and stop spreading it too.

The two have been dating for a long time now and their fans adorably call them Virushka. They are now often spotted together and their chemistry is quite visible now. They even share the space at the Sports Awards, reception of Yuvraj Singh’s marriage, Zaheer Khan marriage, and others.

Anushka Sharma is currently shooting for the yet to be titled movie directed by Anand L Rai. The movie co-stars Shah Rukh Khan and Katrina Kaif as well. The trio will be seen again after Jab Tak Hai Jaan. Virat Kohli just finished the 9th successive Test Series as Captain and would seat out for the upcoming ODI and T20 series against Sri Lanka.