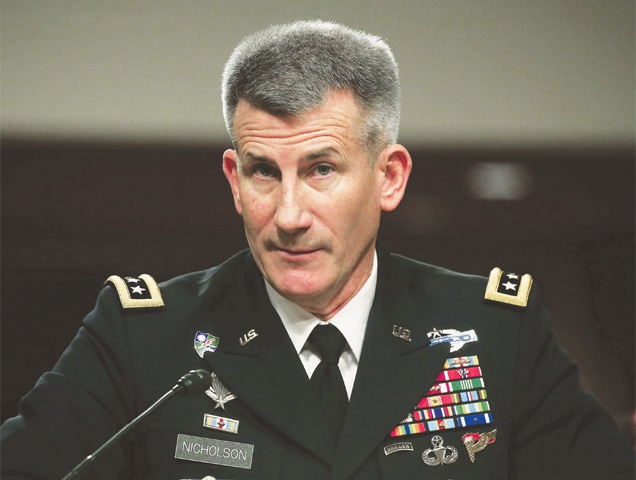 US General John Nicholson has created even more problems for Pakistan. The top US commander in Afghanistan told a local newspaper that Pakistan is providing safe heavens to the Taliban Terrorists. His strong words came after the USA President Donald Trump blasts Pakistan for not acting against the Taliban and other Terrorists. However, General John Nicholson went a step ahead and discusses the places where the hideouts are. According to the Dawn Newspaper, he mentioned the name of the cities like Quetta and Peshawar.

“The Quetta shura, Peshawar shura — these shuras are identified by cities inside Pakistan; we know Afghan Taliban leaders are in these areas. Support for terrorists and insurgents has to be reduced — [it] has to be stopped,”

The US has been fighting the Taliban in Afghanistan for years now. Donald Trump has decided to engage more in Afghanistan stabilization process. He recently thrashed Pakistan for supporting the terror groups. He said that the US has provided billion of dollars as aid to fight against the terrorists but Pakistan instead provided them places in their country to carry out attacks in Afghanistan. The good words of the President for India and urging India to involve more in Afghanistan has particularly not gone well with the only Nuclear capable Islamic Country in the world. Pakistan has shown strong protest and paused the diplomatic meeting exchanges. Few parties even termed it as “Act of War”. The Army has high hopes from China and they believe that China may fill the place that Washington is vacating.

Pakistan is slowly turning into a place of terrorism and the US understands the fact. General John Nicholson even claimed that Washington is aware of the places of the hideout and all are being carried out through diplomatic and bilateral channels.

The statement has obviously did not go well with Pakistan parties. They, in fact, blamed the failed US policies for Afghanistan’s condition and said that Pakistan has suffered from these policies.

Arvind Kejriwal sets a trend – Will others follow it