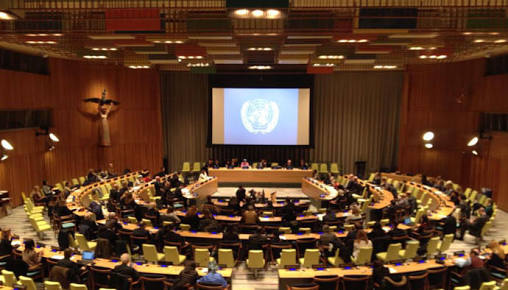 UN Gives Verdict on Kashmir to Pakistan –In a new development, On Wednesday, United Nations clarified that it no longer monitors the dispute in Kashmir as it does not have any mandate beyond the line of control.

UN Gives Verdict on Kashmir to Pakistan
The latest development came in the wake of SAARC meet where Indian home minister Rajnath Singh and Pakistani Prime Minister Nawaz Sharif will hold talks about the Kashmir issue.


Earlier, UN chief Ban Ki Moon’s office gave the statement that UN will continue to monitors the crisis in Kashmir but later it backtracked and said that Kashmir is not on UN’s priority and Pakistan should leave the resolution of Kashmir issue on India. The spokesperson of UN chief’s office Stephane Dujarric clarified that the jurisdiction of Kashmir does not come under United Nations and its India’s internal matter and United Nation only keeps records of cease-fire violation between India and Pakistan.

On being asked that why the world does not want to resolve the crisis in Kashmir and busy solving issues in the Middle East. Dujarric said that “United Nations intervention is not applicable in this case as it is a matter of India’s internal security.” UN Gives Verdict on Kashmir to Pakistan and that is a major embarrassment for Pakistan just before the SAARC meet.

The tension in valley escalated since the killing of Hizbul militant Burhan Waani. The violence in the valley is fanned by Terrorist outfits that operate from Pakistan occupied Kashmir. On the occasion of SAARC (The South Asian Association for Regional Cooperation) meet, Hizbul Mujahedeen chief Sayeed Sallaludin and Mumbai attack mastermind Hafiz Sayeed has called a country wide protest in Pakistan against the two days tour of Indian home minister Rajnath Singh to attended SAARC meet.

Arvind Kejriwal sets a trend – Will others follow it

Anil Madhav Dave Dies – Why Narendra Modi is Shocked at...

Suresh Kalmadi is Life President of IOA – Why Indian Sports...