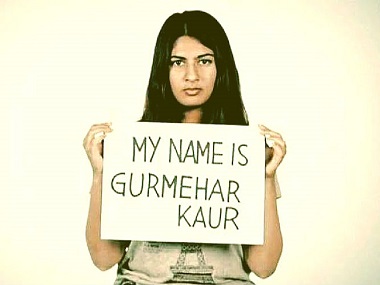 DU is one of the most prestigious institutes in India and Asia. People from different parts of the world visit the university campus for the quality of education and excellence of academics. Well, things are not same for the Delhi University since last few days. The wave that started in JNU and died after nation wide scene has now been transferred to the Ramjas College. One section of people that talk about Azadi, Freedom of Speach and actions Slam the others for opposing them. The other group that talk about National interest and integrity restore to violence to shame the country. Overall, presently, the crowd at the Ramjas College looks aimless and directionless.

Gurmeher Kaur, daughter of Kargil Martyred entered in the controversy and said that War Killed his Dad not Pakistan. She is obviously inclined towards Kashmir and the long-standing Kashmir independence demand. However, the demand has changed now a bit and section of Kashmir now wants to join with Pakistan and the reason is of course Religion and not Prosperity. The same section of people celebrate the death of soldiers and at the same time people celebrate the people. Well, this is what the ultra Nationalists say and the other group talk about the rights of the people.

Overall, the Nationalists have restored to violence for the opposition and the left group seems to be opposing everything. The Government is mute spectator and the various Politicians trying to gain whatever they can by choosing a side.

The post may sound extremely confusing but that is what actually happening in DU. Kanhaiya Kumar became Hero in JNU and may be Gurmeher Kaur from Ramjas Protest. The Universities are no longer discipline and regular studies. It has become a political hub for students and those students who want to only study and make their future are the real victims between the Ultra Left and the Ultra Nationalists.

Hang and Imprison Cow Killer – Who Cares about People now?

Currency Seized Impact – The figure will shock you