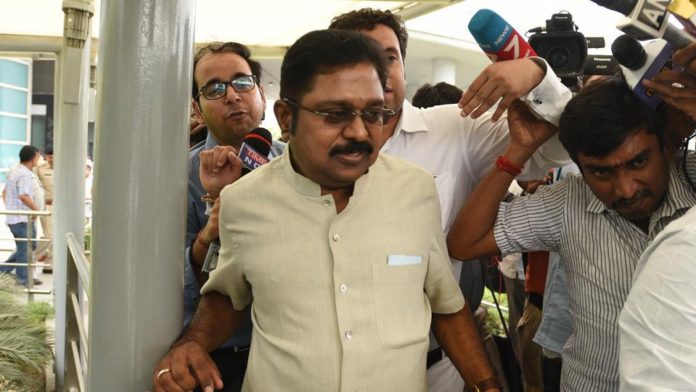 TTV Dinakaran, the AIADMK Amma fraction leader has been arrested in Delhi. Mr. Dinakaran reached the National Capital on April 22 after he was served the summons in Chennai by the Delhi Police. He was questioned for three days at the Crime Branch Office of Chanakyapuri, New Delhi reported Hindustan Times. It has been reported that he was quizzed along with the middleman who was involved in the EC Bribe case.

TTV Dinakaran came to the frame after Sukesh Chandrasekhar, a middleman confessed to having received 1.5 Crores from the AIADMK Amma Leader for bribing the Election Commission to get the Two Leaves Symbol for his party. Sukesh confessed that he admitted and promised to do that with his Hawala network and contacts in the Election Commission. A Chandni Chowk based Hawala network and role of a retired bureaucrat are also under the scanner of the police.

According to the reports, TTV Dinakaran has allegedly paid the middleman a whopping amount of 1.5 Crores through online banking. He was promised with the Party Symbol, but the Delhi Police team caught Sukesh Chandrasekhar before that. The further investigation revealed the name of Dianakaran, who is also the Deputy General Secretary of the AIADMK Amma fraction and nephew of V K Sasikala, the General Secretary of the party.
The Police has formally arrested him in connection with the EC bribing case. He has faced many allegations and cases of corruption and disproportionate assets before and was also expelled from the party by the then chief J Jayalalithaa. However, returned the manifold after her death to take over the highest position after her aunt. His aide Mallikarjuna has also been arrested.