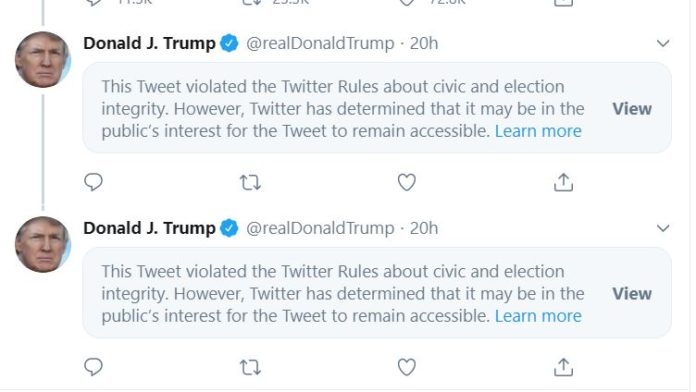 go to your Polling Place to see whether or not your Mail In Vote has been Tabulated (Counted). ” He added, “If it has you will not be able to Vote & the Mail In System worked properly. If it has not been Counted, VOTE (which is a citizen’s right to do). If your Mail In Ballot arrives….”

“after you Vote, which it should not, that Ballot will not be used or counted in that your vote has already been cast & tabulated. YOU ARE NOW ASSURED THAT YOUR PRECIOUS VOTE HAS BEEN COUNTED, it hasn’t been “lost, thrown out, or in any way destroyed”. GOD BLESS AMERICA!!!”

However, in the tweet, Donald Trump wanted to ensure that all the votes of the Americans are counted. He passed the message to the people to ensure that the Mail in Vote is counted.

There is a widespread debate going in the US about voting. Due to the pandemic, many have demanded mail in vote. However, Donald Trump has urged to vote in person to avoid confusion and delayed results. He even said that the election could be rigged with mail in vote.

Many states have opted for mail in vote in the wake of the pandemic. Federal Government has challenged the decision as well.

American goes for election on November 3rd amidst countrywide protest, violence, and pandemic. This is the one of the worst times for the World Superpower, where political and ideological fundamentalists have fuelled violence in the country to satisfy their own agenda.