Sridevi Death has triggered a major shockwave in the Bollywood industry. The 54 years old actress died on Saturday in Dubai. Sridevi went to Dubai along with the entire Kapoor family to attend the marriage of her nephew. She stayed back in Dubai for few more days, while her husband and daughter Khushi came back to India. There are various other media reports that suggest that her husband Boney Kapoor went back to Dubai on 24th February. However, as there is no official confirmation of the reports, so we refrain from commenting on the same.

The Sridevi death has been declared as an accidental drowning. Again, there are too many reports, too many contradictions. There were early reports of cardiac arrest which led to her death. It was then reported that heart attack took her life as she fell unconscious in the bathtub. There were reports that alcohol influence as well. But apart from drowning in the bathtub, nothing is confirmed and official. Dubai Police is still investigating the death, and this is the reason, her mortal remains are still in Mortuary.

As per the procedure, the family needs to receive a nod from the Dubai Public Prosecution. This is pending since yesterday, as the authorities are trying to establish the sequence of events. Once the investigation is done, the mortal remain would be sent to Muhaisna for the embalming. Khaleej Times reported that even though the Embalming department works from 9 AM to 5 PM, but if the authority orders, then it can be done at any time. It takes around 90-100 minutes to embalm reports suggested. The Indian Embassy and other Indian authorities need to cancel her passport before the permission is given to fly her mortal remains. It is expected that the process would complete today, but nothing is official as of now. The authorities and the officials from India are cooperating with the family as well as the Dubai counterparts to ensure the process is smooth and hassle-free. Arrangements of her last rites have already been arranged in Mumbai. 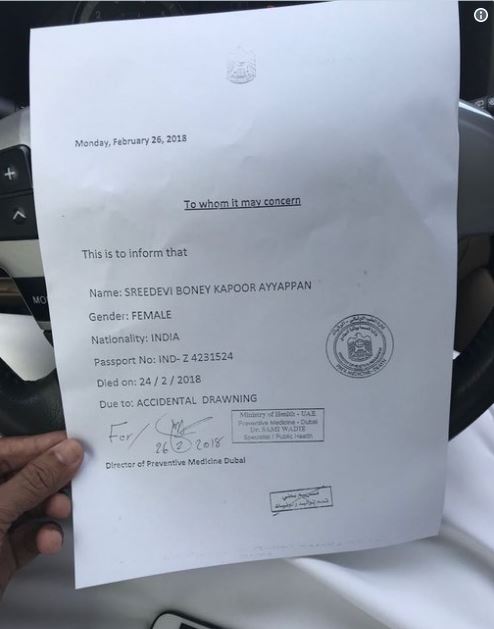 The Superstar of Indian Cinema, Sridevi’s demise has literally chocked Bollywood. There are few rumours as well about her death, but the fact is still pending. The autopsy report has already suggested drowning and the authorities do not really suspect a foul play.

The Superstar of Indian Cinema has left her legions of fans and family in shocks. But her movies will always be cherished as the memories of her.