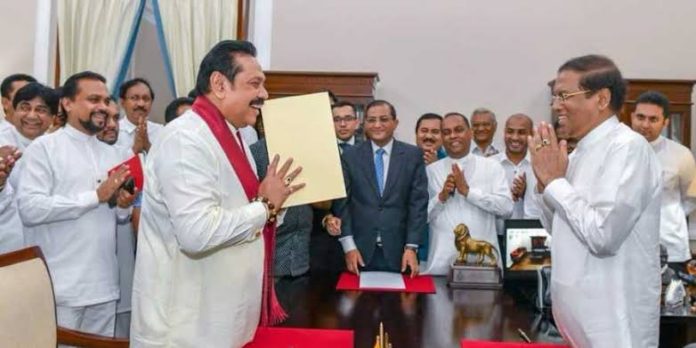 Sri Lanka Political Crisis has deepened and that has left many wondering about the future. In the gap of few days, the strong man of Sri Lankan politics Mahendra Rajapasakha has come back, this time as Prime Minister. President Maithripala Sirisena has sacked Prime Minister Ranil Wickremsinghe unceremoniously over alleged corruption charges and assassination plot.

However, it is widely believed that President Sirisena was looking for an excuse to ouster Wickremsinghe and bring back Rajapasakha. In fact, it is said that the former President whose regime ended in 2015, Rajapasakha, behind all the chaos. Now he is cementing his place as Prime Minister. He has almost everything apart from Temple Trees, official residence of Sri Lanka PM. He is confident of having numbers.

Wickremsinghe on the other hand has refused to leave the residence even though all his power has been stripped. His followers have formed a ring of protection around his House. As of now , no ugly news has been received from that front.
The parliament of Sri Lanka will decide the Prime Minister on November 16. However, it is widely believed that the results will shift towards the President.

Sri Lanka is already recovering from the civil war and this can be another set back for the island country. Rajapasakha is known for his close ties with China and his actions against the Tamils in Sri Lanka are not so heart charming either. Removal of Wickremsinghe is a poor sign for India Sri Lanka diplomatic ties. However, so far it has been a wait and watch for both India and China.