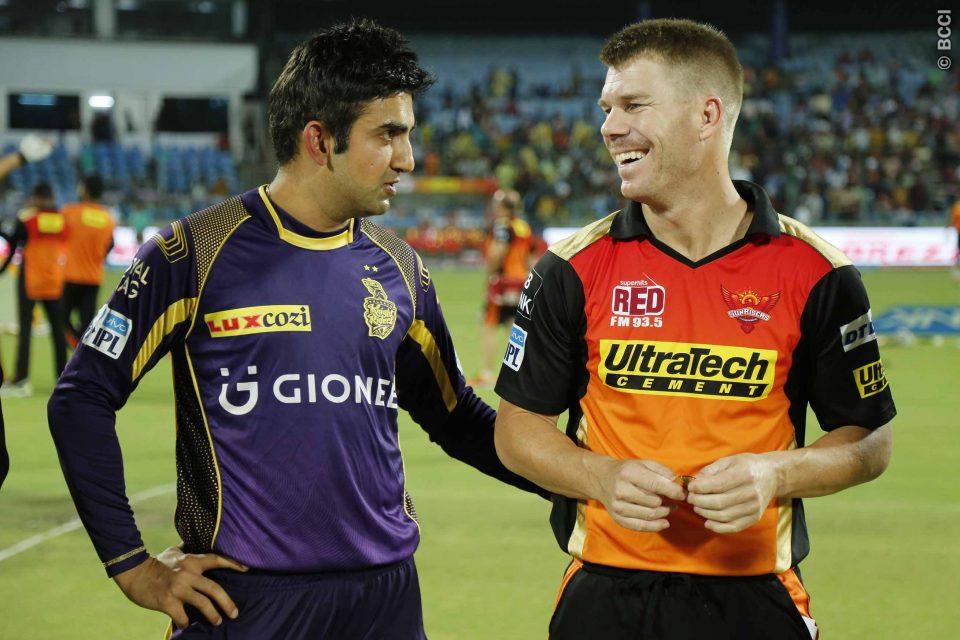 SRH defeats Kolkata Knight Riders by 22 runs. They will now face Gujarat Lions in Delhi for the Qualifier 2. The winner of that will play RCB in Final

Gautam Gambhir – Didn’t have big partnerships. Someone needed to play a Yuvi kind of cameo, it was an unbelaievable innings, changed the momentum in their favour. And if one of our batters continued like that, we could have won the game. [Russell] Gives us firepower in the last overs with the bat and with the ball too. Tried our level best. We should have gotten 160. Bowlers did very well, batters didn’t live up to expectation. This is a format where we have to keep playing well. Individuals can take the game away. We were confident, we had won against them, restricting them to 160 was very good. But when you lose someone like Andre Russell, difficult to replace them. Kolkata fans have been the most loyal

David Warner: Bipul’s two sixes came in very handy. Little but short with the batting, but runs on the board is crucial. So good execution by the bowlers. Took some spectacular catches and we try to improve every game we play. Will help, we’ll change wickets, but the square is the same. Both teams have batting fire power and depth in bowling. We needed to win every game to win the final. We are up against Gujarat, we have set the benchmark high, now its about come back and executing it again

Kolkata has lost the first wicket cheaply. It is down to Gautam Gambhir again. Murno gets run out, Pandey joins Gambhir. Gambhir falls for Kolkata. Can Yousuf be the savior again? Kolkata is losing the match by good margin. The match is now hung in balance but KKR is facing it tough. Jason Holder holds the key now.

In a Do or Die Match, Kolkata Knight Riders opt to bowl against Hyderabad in SRHvKKR clash. The IPL Eliminator match will send the winner to the Qualifier 2 where the winning team will play Gujarat Lions. Sunrisers Hyderabad has managed to set up the score of 162 in 20 overs. Even though the team was struggling at a time but Yuvraj Singh played a great innings to take the team to respectable score. High expectations will be Gambhir and Uthappa as they will begin chase.

Kolkata Knight Riders is still without unfit Andrew Russell and Jason Holder has been included in the playing XI. Here is the Team for the IPL Eliminator.

David Warner, Shikhar Dhawan and Moises Henriques have failed to convert the start and Hyderabad is struggling with 71 runs on board and 3 wickets down. Yuvraj Singh is on the crease and the hero of last IPL, Deepak Hooda. However, the spinners of KKR are restricting the batsmen to score freely. It will be interesting to see the role Yuvraj plays in this match. This is all but only opportunity for the both the team and none will love to lose the game.