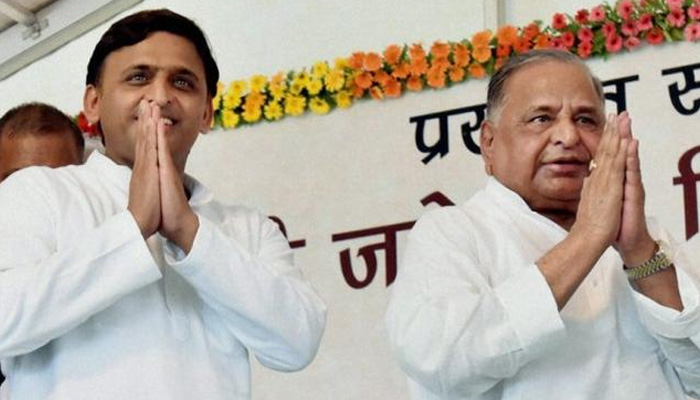 SP Family Feud has remained the major news of the UP Assembly Elections. However, as the days are closing by, the Yadav Family Feud looks staged drama. However, the reason may not be the same given by BSP or BJP. Congress has formed an alliance with SP after blaming the Akhilesh Government of “Lawlessness” a few days ago. The SP Chief Mulayam Singh Yadav remembered the same and was dead against the alliance. He even said that he won’t campaign for his party. But he took another U-Turn, one of many during the feud and said that he would campaign and Akhilesh Yadav would be the next Chief Minister if SP comes to the power in Uttar Pradesh for the consecutive time.

The SP Family Feud started off with Shivpal Yadav and Amar Singh rejected Akhilesh as a leader. The UP CM even barred them from his cabinet. Mulayam Singh Yadav came into the picture and supported his brother instead of his son. The feud was widening and only stopped when the Party Symbol was given to Akhilesh instead of Mulayam due to the support of the legislators by the Election Commission. However, if noted carefully, the statements of SP Supremo, Mulayam Singh Yadav, the staged drama becomes very evident.

First Mulayam Singh said that he would reject the candidates proposed by Akhilesh, he later accepted. He opposed the alliance with Congress and said that he won’t campaign but agreed to do so again. Reports emerged that Shivpal Yadav has said that he would form a new political party. Mulayam Singh Yadav rejected that also. Overall, Mulayam Singh Yadav has made contradictory statements during the entire fiasco. This has only elevated his image as a strong man who fights for his party against his son and then as a Father, who accepts his son. On the other hand, the image of Akhilesh Yadav has also elevated as a strong Chief Minister who can even fight with his family for the people and state and win.

So, it is a Win-Win Situation for both Akhilesh and Mulayam. This could be a genuine Family Feud as well, but at the end, everything falling in line with SP and all of a sudden, Samajwadi Party has negated the poor image created in the last five years for the crime and other lawlessness.