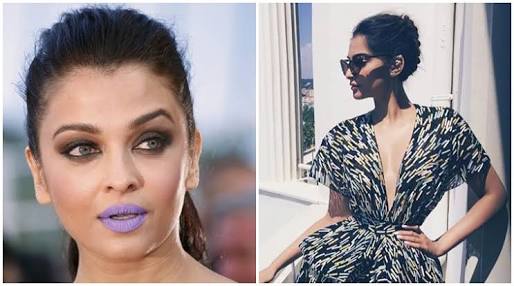 However, now L’Oreal’s another brand ambassador Sonam Kapoor has told PTI that the purple lipstick event was just a desperate attempt from Aishwarya Rai Bachchan to be on the news everywhere and she achieved it. The ‘Prem Ratan Dhan Payo actress also claimed that the purple lipstick look was not decided by L’Oreal as the former Miss world didn’t walk the red carpet for L’Oreal that day.

Further talking to PTI Sonam Kapoor also said that “Aishwarya Rai Bachchan might be very happy as she got what she wanted. Even Amul printed an ad for her and she was trending on social networking sites for the entire day”. The actress also added that she actually liked the purple color lipstick and she thinks that Aishwarya Rai Bachchan carried it with confidence.

On being asked about her red carpet appearance, the gorgeous actress said that she choose Ralph & Russo gown as it was a sari-inspired gown and she accessorized it with Jhumkas styled earrings. Reacting to the internet memes making fun of her appearance, the actress was quick to add that she dresses for herself and she thinks that she looked good which is more important for her.
While many people associate Cannes with red carpet appearances, Sonam thinks that Cannes is all about widening the horizon where you get to meet new people and try to understand their perspective as well.

Also Know about the Arijit Singh and Salman Khan.

Bhoomi Movie has another Big Announcement