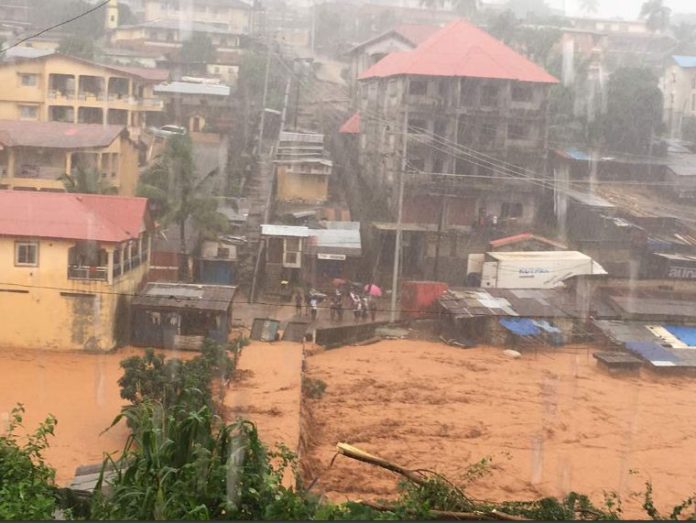 Sierra Leone mudslide has simply swept the city. Sudden and heavy rainfall has triggered the mudslide that has swept across whatever came in its way. More than 900 people are still missing and at least 297 bodies have been found as per the Government Sources. The devastating flood came down heavily and took away homes and people along with it. The exact figure of loss is yet to be understood but early estimates suggest that at least 350 people have been killed in the flood and the number may rise into several hundred more. So far, 109 Male, 83 female, and 105 children body have been recovered as per the same source.

Many people were swept across to the sea by the flood and dead bodies are now coming back to the shore, reported many media news. The authorities are trying best to rescue people from the flood. The Army has also been pressed into the rescue operation. Many are believed to be trapped in the debris of the homes. The rescue operation is ensuring that anyone alive in the tragedy is pulled out first. The Connaught Hospital at the Freetown has received more than 300 bodies reported the US News and many bodies are mangled beyond recognition. The death toll can increase by huge number believe the media reports.

Many prominent personalities of Sierra Leone have lost their families. Many have escaped but failed to rescue families. People have lost their families and loved ones. The grief and the tragedy of the Sierra Leone Mudslide are not something that can be explained with simple words. According to Red Cross, more than 9000 people have been affected by the mudslide by some way or the other. UN has already decided to provide the Emergency Relief to the devastating flood situation.

The Government is trying to contain the devastating flood situation and carry out the rescue operation at the same time. The flood situation is still at an alarming stage and many are still trapped. The authorities believe that the situation has to be taken in control at the earliest before any disease starts spreading due to the mudslide. The flood often brings epidemic and the African country has witnessed the same before.

Petya Ransomware – How dangerous it is for your computer?

Will Delhi Daredevils come out of the Jinx