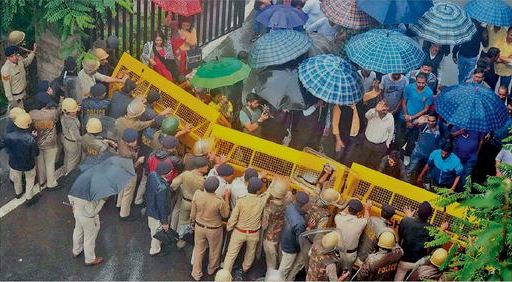 Shimla Rape and Murder has rocked the hill city. Most of the parts of the city have been paralyzed by the protests by the citizens. People are coming out to the streets and shops are also closed. Well, you might have read that the six accused have been arrested in this case. One of them even got killed at the jail by the prime accused. Well, after so many unfold and twists, you might be wondering why there is a protest at first place? Well, the Shimla Rape and Murder of a 16 year old school going girl had mystery deep within.

Are the Accused Real Accused?

The biggest question, in this case, is falsification. According to the people and the family, people who have been arrested are not the real culprits. The real culprits are influential people and they are directing the case as they wish through the corrupt system. A recent article published in the local newspaper( Dainik Bhaskar)   has quoted the wife of the accused who was killed. She said that the day the girl was kidnapped, her husband was along with her. Later, Raju (the accused who killed her husband) and took him. She added that her husband also told that the life is going to change, and they are going back to Nepal as he will receive money. He forced her not to speak anything and said “Sirs (commonly referred to influential people) will come and send you people to Nepal and he would join them in another six months. He said he is going to jail for something good and this is his opportunity. She feels threatened at first but now she has realized that her husband is already gone and she must speak the truth. She is ready for the statement as well to Police. There is no information on the statement, however.

According to the twists known so far, it looks the six people have taken money to become the accused in this case. The person who was killed at the jail, may have understood that he has been framed and he is not going to get out of jail in six months. He was silenced for ever by smashing his head on the floor of the jail. But what was Police doing then? Perhaps they were waiting for this to happen.

High ranked people have been transferred from Shimla. Most of the investigation officers have been changed in recent days now. The Court has ordered a CBI enquiry to the Shimla Rape and Murder case. The little girl whom the parents warned about wild animal did not know that men are even worse than that. Her body was found in the forest and the post mortem report has confirmed heinous rape and sexual assault.

The accused arrested may have landed up in jail for money and the real culprits are enjoying somewhere else. The protesters want the real people to be arrested but whether they would be or not is a matter of doubt now.