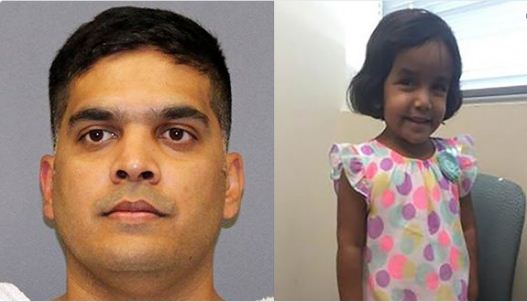 Sherin Mathew would have been the happiest girl when she was picked by her adopted parents from India. Everyone would have thought that the fate of the little girl would change forever now. She went to the US along with her adopted parents but the destiny has something else for her. The 3 year old girl was found dead in a culvert in the outskirts of the Dallas. Her adopted father confessed that he got rid of the body when she accidentally choked to death while drinking milk.

Wesley Mathew and Sini Mathew were living in Dallas along with their biological daughter and Sherin. Sherin reportedly had some issues with her development and her father was not happy with that. On that day, Sherin was not agreeing to drink milk claimed her father and Wesley physically assisted her to drink that. However, during the process, she chocked and died. So, the adopted father got rid of her body. The dental reports have confirmed the death of Sherin Mathew and Wesley has also confessed. However, the exact reason of her death is yet to be ascertained.

What happened was not only unfortunate but also apathetic. Little Sherin was only one year and six months old when her biological family abandoned her in the Gaya District of Bihar. She was then adopted by Wesley and Sini Mathew and the then Saraswati turned to Sherin. But understanding the developmental issue might have changed the mind of the father. She was once again failed by her parents and this time she had to pay the price of her life in the United States.

Stubborn child or children with such issues are common. The emotional trauma that she might have suffered in her early days, could have imparted some of the negatives in her life. However, it was the love and affection of Wesley and Sini Mathew that could have solved her problems. Instead, she received death from an apathetic man who dared to throw her body and lie to the Police that Sherin is missing.

Wesley Mathew has been charged with felony injury to a child, which is punishable by 5 to 99 years in jail. The Mathew couple has already lost the custody of their biological daughter and she is now with the foster care in Dallas. Sini Mathew has appealed of non-guilty and said she was sleeping when everything happened.

The girl is no longer with us, but her face would ask many questions to the people, that are we really that heartless?