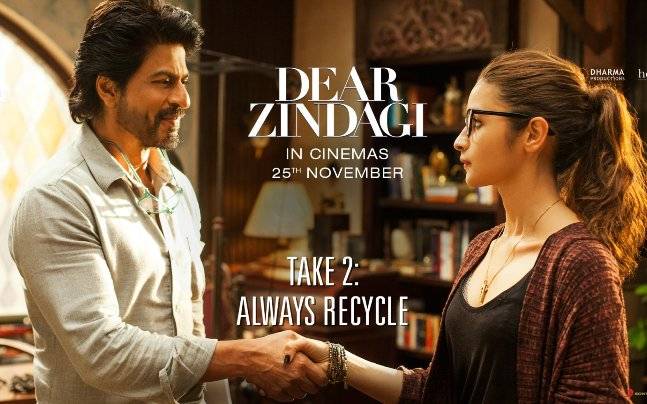 Shah Rukh Khan never fails to impress his fans, and the adorable Alia Bhatt is as fresh as ever in whatever role she takes up. She manages to bring about a smile and brighten up even the dullest of the days. And, when you have the King of Romance and the Queen of cuteness in one frame, you have a blockbuster waiting to release. And, such is the film, Dear Zindagi, which is Gauri Shinde’s second directorial venture, after the super-successful, English Vinglish.


The makers have come out with a unique way to promote the film, and they would only be releasing small teasers rather than a full-blown trailer. The Dear Zindagi Take 1 was released a few days back which saw SRK teaching Alia how to play kabaddi with the sea and giving her important life lessons, the Take 2 released today saw Alia trying to outsmart SRK but getting trolled herself in the end.

While releasing the teaser, the makers and the actors had the cutest conversation possible on Twitter. Have a look at the tweets below:

Here we go! #DearZindagiTake2.. Yes I know my jokes are terrible. Work in progress 🙂 till then enjoyyyyyyyy https://t.co/Mg8UVYrEMW

All you need is someone to make great conversations with. #DearZindagiTake2 @iamsrk @aliaa08 pic.twitter.com/3BKy4MMsNv

@aliaa08 & @gauris u both need a crash course in humour. Will give life lessons in jokes when I am back. Till then… https://t.co/MJCKSopTA3


The film has all the ingredients for a superhit. With SRK and Alia’s fresh chemistry, the breezy script of the film, and its refreshing takes – we are sure it will be a super-duper hit. Directed by Gauri Shinde, the film also stars Aditya Roy Kapur, Kunal Kapoor, Ali Zafar, and Angad Bedi. The film, Dear Zindagi, features Alia Bhatt as Kaira, a young filmmaker and SRK as Jag, her mentor. It is slated to release worldwide on November 25, 2016.

Tubelight Movie – Things that you must know about the Salman...

Is Abhishek Aishwarya Marriage in Trouble?