We do not really hear ill words about a close family member after the death. Well, if you are under that impression then something weird happened in Minnesota. The children used some scathing words as an obituary in a popular Gazette about their mother. The savaged obituary is not only harsh but does reflect the hatred in the mind of the children. Kathleen Dehmlow died on May 31, 2018, in Springfield. But the obituary followed was unusual. If you’re interested in a high-quality obituary and other funeral related services, it might be worth looking into Funeral Packages. They shouldn’t come back in a similar fashion to this from what I’ve heard from a friend. But I digress.

As per the obituary, Kathleen was born in 1938 and married Dennis Dehmlow. She had two children from that marriage, Gina and Jay. However, she was pregnant again in 1962 by her husband’s brother, named Lyle Dehmlow. What happened next changed the course of the story. She according to the obituary, abandoned her children. Gina and Jay were raised by Mr. and Mrs. Joseph Schunk. At the end says,

“She passed away on May 31, 2018, in Springfield and will now face judgment. She will not be missed by Gina and Jay, and they understand that this world is a better place without her.” 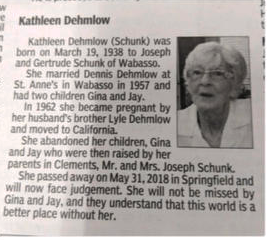 Well, Gina and Jay did not really make comment why they wrote such harsh obituary for their biological mother in Redwood Falls Gazette, but it is obvious that they have never pardoned their mother for abandoning them.

Even though such words are rare but not uncommon, there are previous incidents where children used harsh words as an obituary for the cruelty, the parents showed to them. If you want to take a look at some of these, you may want to do an obituary search into the archives if you are looking to find the records for any particular person that is no longer with us. For example, Marianne Therese Johnson-Reddick’s daughter outlined the death notice of her mother in the following words,

“She is survived by her 6 of 8 children whom she spent her lifetime torturing in every way possible … Everyone she met, adult or child was tortured by her cruelty and exposure to violence, criminal activity, vulgarity, and hatred of the gentle or kind human spirit.”