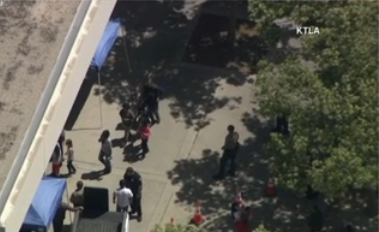 The Eight year old student has succumbed to the injuries in the incident. The other boy of 9 years old is said to be stabilized. The police informed that the victim  Karen Elaine Smith was estranged wife of the killer Cedric Anderson. She left him for his behaviour. It is has been reported that the killer had previous incidents of domestic violence, petty crimes and drug offence as well.

San Bernardino Shooting has left parents left with wounded heart and worried. Two adults have been killed in a shooting incident at North Park Elementary School. The preliminary investigation has revealed that one woman has been killed by the bullet and a man has succumbed to the self-inflicted gunshot reported CNN.

The reports suggest that two students have been injured in the shooting incident. The condition of the students is said to be critical. It is understood that they have been shifted to the medical care. However, no identity has been revealed as of now. The relationship between the man and the woman who died is yet to be established confirmed the police. The police believed that the students had to pay price as they were closer to the female victim. The investigation has not revealed much as of now. However, the San Bernardino Shooting investigating officer has confirmed that there is no more danger now.

The anxious and worried parents are still waiting outside the California School. The identity of the injured students is yet to be revealed and that is causing more panic among the parents. The shooting incident can be a rage incident or pre-planned murder and suicide plot suspects the investigation. However, the official report is still to be released.

This is not very uncommon for the American Schools and the country has seen a huge surge in such incidents in recent years. The Gun Act has often come in the debates of the United States but little has been done so far.

Why Ivanka Trump is a Proud Mother