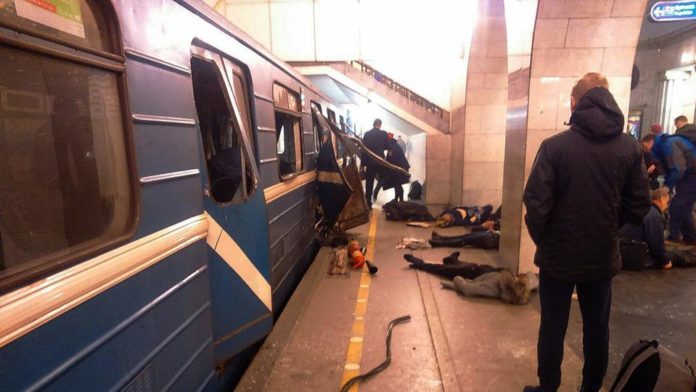 Saint Petersburg metro blast has killed close to 10 people so far. At the preliminary level of investigation, the Russian Investigative Committee has termed it as the Terrorist Activity. However, no angle is ruled out from the investigation. The recent reports have also suggested that another bomb has been defused in another Metro Station.

The metro network has been completely shut down as the rescue operation remains in full swing. At least 39 people have been hospitalized for the attack. Three days of mourning has also been announced. The video footage has shown that the powerful blast took off the door of the train as the lifeless bodies were scattered in the station. The reports have confirmed that seven people died on the spot whereas 3 other succumbed to the injuries.

Additional security measures have been announced after a bomb was neutralized at the Vosstaniya Square metro station.

The attack on the Public transportation is not new in Russia and the country has suffered many losses before as well. Insurgents from Chechnya and the Islamic terrorists have often targeted Russia for the alleged role.

The security operations have been set up and it is believed that the security operations are at the peak to nab the culprits of Saint Petersburg attack. However, it is very early to make a comment on the group that has made the blast. So far, no one has claimed the responsibility for the attack. Security is also scanning other public places to avoid any such incident yet again.

Gurgaon Shocker – Woman Raped in Moving Car, thrown out in...