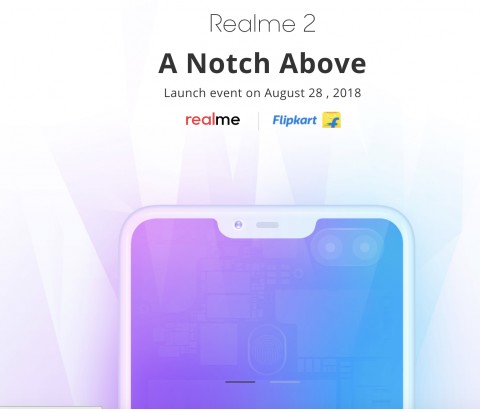 Realme 2 launch in India would be a mega event just like Realme 1. The Sub-brand of Oppo made its mark with Realme 1 and in all hopes that the next version would be better. The hardware packed Realme 2 is rumoured to be one of the budget phones in India with huge specifications.

The Launch Event is scheduled to start at 12.30 PM

The phone is expected to don 6.2 inches of display with 88.8% screen to body ratio. The Full HD display with 19:9 aspect ratio is obviously an advantage for the phone. The Realme has made major changes in the camera section this time. It has been reported that the phone would feature dual camera at the rear. The 13 MP camera will be coupled with 2 MP depth sensor. The quality of the camera is expected to be improved as well.

The Realme 2 is rumoured to be featured with an impressive 4230 mAh battery. Price battle has always been pivotal in Indian smart phone industry and Oppo is not going to back down on that as well. The Realme 2 price in India is expected to be around INR 10,000. However, the phone is directly taking on Redmi Note 5 Pro and the Realme 2 could pose a serious threat to its competitors. The phone is expected to provide more features than any other phone under the same price range.

The phone launch can be seen live from 12.30 PM. It will be exclusively available on Flipkart.