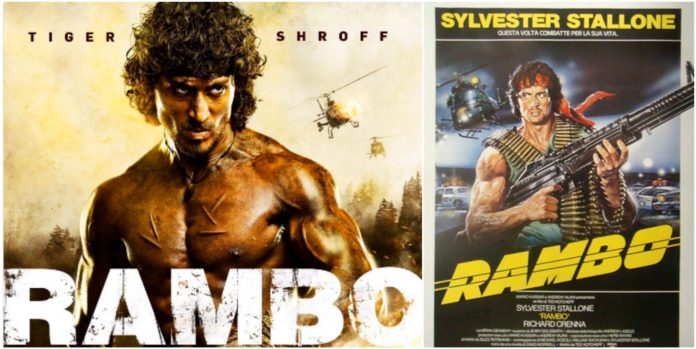 Rambo Remake is making the news today in Bollywood. Tiger Shroff has proudly shared the first poster of the movie. Even the real Rambo, Sylvester Stallone has wished luck to the team. However, somewhere down the line, Bollywood is losing its credibility and charisma. The art of copying has reached such a stage that the indigenous and creative ideas of the directors or producers are hard to get by now.

Rambo Remake is another instance which shows that how Bollywood has relied on remakes. Even small ideas can make good movies. A good movie is not all about glamorous roles, song sequences or foreign shooting. The age old formula of spicing the screen with content less movies will sooner or later be finished. This is the era when the Filmmaking is changing. If you look up to the regional industries like Telegu, Malayalam, Tamil and Bengali, the filmmaking is reaching other heights. It is not about a Magnum Opus like Baahubali or
Baahubali 2. It can be simple and strong as Dangal as well. It can be effortless like Aligarh that makes a movie meaningful.

The Director Sidharth Anand may put in his thoughts in the Rambo Remake and Tiger Shroff may give his 100%. However, it will be anyway copied or will be compared with the original one. The movie was written for a particular plot and that may not fit here. Well, the movie may end up earning 100 Crores and even more. But that won’t really bring the best of the Director or the Actors.

Bollywood must try something new. The new generation directors must put their energy and take the industry to new heights. It is time to take the Indian Cinema to the greatest level. There are enough talents in the country, it is the matter of time before Indian Cinema and Art would recapture the world attention yet again.