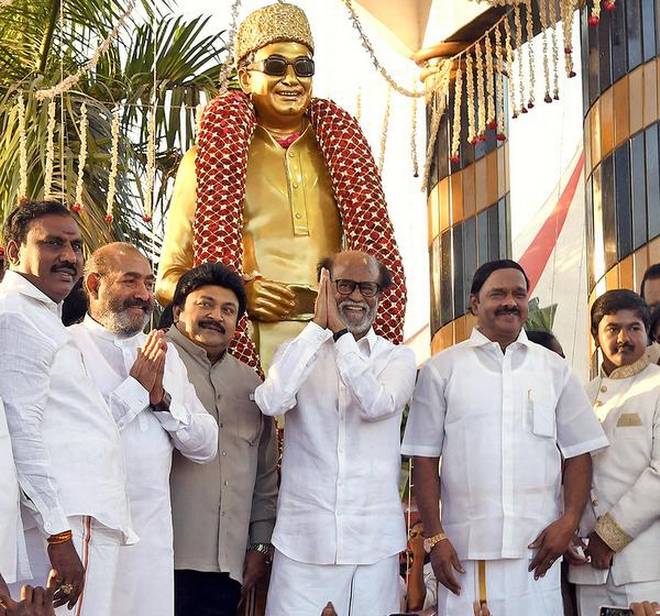 Rajinikanth Speaks for the first time as a Politician, and it was disappointing. He has his own charisma, but he wants to be under the shadow of the MGR, the former CM of Tamilnadu, actor, and founder of AIADMK. When he entered the politics, a fresh wave was expected, but his speech was focused on MGR and his rules. So, clearly, he wants to bring back the MGR rule to Tamilnadu with the help of technology and modern think tanks. He is still in the nascent stage of his political ambitions and his speech clearly indicates that.

The vacuum created for leadership after the demise of the former Chief Minister Late Jayalalitha has been a trigger point for the actors like Kamal Hasan and Rajinikanth to plunge into the politics. There is no harm when actors join the politics, but more is expected out of them. Rajinikanth did not really make things clear that would make Tamilnadu happier. The same brand of politics may not be successful now. Bringing MGR back to the current political scenario can definitely change the political game, but will not help Tamilnadu in long term.

Yes, he did speak about no caste, no religion, clean politics, but isn’t that too common? No political party can say that they will be corrupt, there is nothing new in it. Real issues were expected out of him, finances, policies, education, transparency, good governance and many more. However, he linked most of the things to the ideology of MGR. Yes, if someone has done good in past, he must be admired, but that does not define Rajini as a Politician. Whatever, MGR has done, it was MGR’s era, now Rajini needs to do things differently to ensure a better a Tamilnadu.

However, the entry of Rajinikanth may simply divide the AIADMK leaders and vote shares in coming times. The brand of politics for both look same and on the same course.