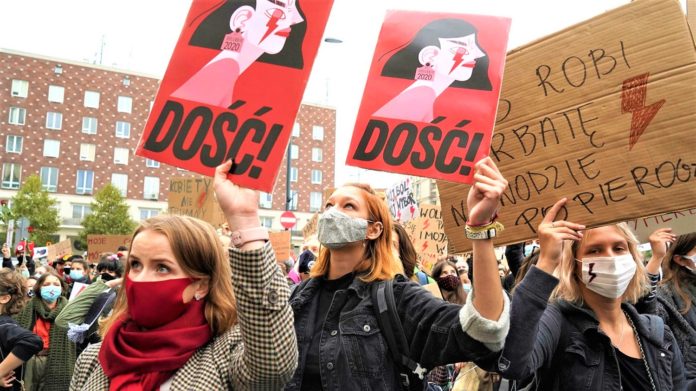 Poland Abortion Bill Protest is intensifying against the government. The protestors are thronging on to the streets defying coronavirus lockdown to voice against the new adoption of the abortion law.

This adoption would make abortion a near-total banned. Abortion is now possible only in case of rape, incest, and risk to the mother’s life. The ruling is expected to be included in the Journal of Laws.

Poland has restrictions on mass gatherings due to the pandemic. However, people are defying all the restrictions with messages like, ‘Free Choice, Not Terror’. The activists and the protestors basically brought the traffic to halt in Poland.

The constitutional court verdict of the Poland Abortion Bill Protest was first issued in October last year. This was issued after the Ultra-Catholic Law and Justice Party (PiS) requested.

The activists have arranged a press conference and urged everyone to join the protest to push back the government on the law.

The opposition attacked the right government of Poland and termed it as interfering with women’s freedom of choice. The Left Party even said that they are not going to win against the women.

Poland has a very catholic conservative society. Poland reports only 2000 abortions every year officially, however, more than 200,000 abortions took place in Poland either illegally or outside the country, reported CTV News.