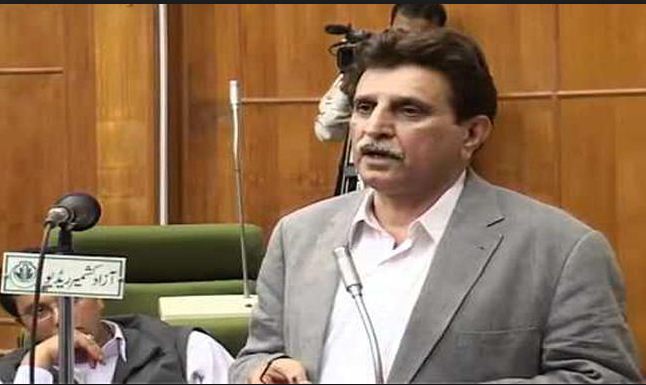 POK Prime Minister Raja Farooq Haider has openly said that people of Pakistan Occupied Kashmir may rethink to which country to make annexation to. The statement came soon after Pakistan Prime Minister Nawaz Sharif was disqualified from his post. He is also from the PML – N party and is a supporter of PM Nawaz Sharif.

The POK Prime Minister was addressing the media along with the Chief Minister of Gilgit Baltistan Hafiz Hafeezur Rehman. In the joint conference, they urged that PML-N has done that. However, now he feels that Pakistan is not going in the right direction, and in such condition, the people may think which side to annex. The news was reported by The News, a Pakistani Newspaper. The joint statement was probably given to indicate a political shift in Pakistan. Even though, both POK Prime Minister and Gilgit Baltistan Chief Minister indicate a political shift in Pakistan. Even though a Nawaz Sharif loyalist Shahid Khaqan Abbasi has been appointed as the interim Prime Minister, but the political crisis is not going to end here.

The POK Prime Minister Raja Farooq Haider did glorify the CPEC to claim the party’s appreciation but the growing anger among the POK residents was reflected. Many POK residents have protested against the Pakistan rule and army before. However, the statement from two political leaders of the disputed lands shows and exposes the hypocrisy of Pakistan.

CPEC is already taking Pakistan to the famous debt trap of China and in near future, Pakistan will lose all the controls to China for non-payment of the loan. The Pakistan Occupied Kashmir has seen no growth, development or prosperity. There isn’t a single airport, not even small in entire POK. The POK PM is a virtual leader who was no power or authority and everything is controlled from Islamabad and Rawalpindi. Pakistan has only turned POK into a hub of terrorism to disturb the peace and harmony of Jammu and Kashmir in India.

It is not far when the people of Pakistan Occupied Kashmir and Gilgit Baltistan expose Pakistan’s double standard openly and no oppression would be able to hide that.