Pakistan Boy reunited with mother at the Wagah Border on 4th of Feb, 2017. The incident took place at the border when the 5 years old boy was handed over to the Pakistan High Commission and then to his mother. The boy was in Kashmir from where his father belongs.

The story began in March 2016, when Iftikhar left the Lahore home with his father. His father reportedly lied to his wife that he was taking him to a wedding. Instead, he took his son to India through Dubai and went to Kashmir, his native place. After realizing the sensitivity of the issue, mother of Iftikhar immediately filed a case in the Indian Court and sought the custody of her son. It took only a couple of months to pronounce the verdict to hand over the kid who is a Pakistani National to his mother. However, when it comes to India and Pakistan, nothing becomes very easy. The situation was even more complex as Iftikhar was in Kashmir and the unrest broke out in July.

The High Commission of India from Pakistan, Abdul Basit said that the Indian authorities were helpful in reuniting the boy with his mother. It did take some time but the young boy was finally handed over. The emotional scene melted the heart of everyone when the young lad was handed over to his mother.

Even at a time of rivalries and enmities, the gesture between the two countries is often seen. This was one of the examples when either Pakistan or India returned the people who accidentally or forcefully crossed over to the other side of the border. 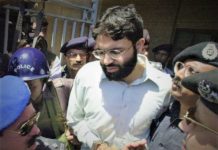