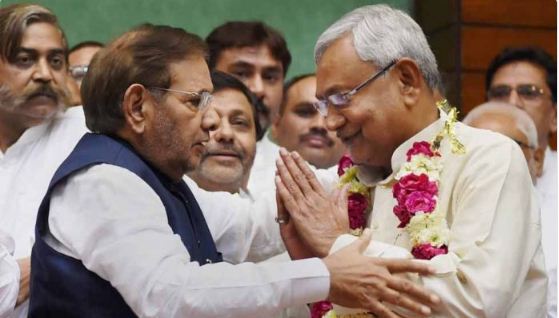 Sharad Yadav has started yet another motion and reintroduced the chance of splitting of the JD(United). The senior leader and the former President of the JDU have said that he has the support of the 14 state assemblies. The fraction of Sharad Yadav has claimed that the fraction has support and Nitish Kumar should be on his own. As per the media reports, Arun Shrivastava, a senior JDU leader of the Sharad Yadav Fraction, the party has always enjoyed the National Footprint and relevance. However, they alleged that Nitish Kumar has basically turned the party majorly into a regional Bihar Party.

The split and merger of the Janata Dal is nothing new and it has a history of such incidents. In fact, Nitish Kumar along with the then leader of Samata Party George Fernandez merged their party with the Janata Dal (Secular) along with Lokshatta Party to form the new look Janata Dal (United). The fraction of Sharad Yadav now claims that Nitish Kumar must not form his own party after he has again allied with BJP in Bihar. Nitish Kumar is the President of the Party and Sharad Yadav was a Rajyasabha MP and he was sacked as MP by the Party. However, things do not settle there.

It is evident that the party will split. This has become inevitable now after the two leaders came out against each other. The primary analysis says that Nitish Kumar does have enough support to continue the Bihar Assembly. However, the split of JDU may simply mean that other leaders, who dream of to be part of the second front against BJP, relinquish the party membership. However, the JDU leader KC Tyagi has blamed Congress President Sonia Gandhi for all the problems. He has accused Sonia Gandhi of creating rift t boost the opposition camp.

There are two possible situations here. The first is that Nitish Kumar forms a new party or go back to his old form of Samata Party if it is supported by the legal matter. There can be a motion against him and pressure can be implied for the same. However, he is the President of the Party and has adequate support in the assembly, so he may not get sacked from the party itself. However, he can sack someone from the party considering his authority.

The stance of the Sharad Yadav fraction may clarify the situation better in coming days. However, the split of JDU looks inevitable.