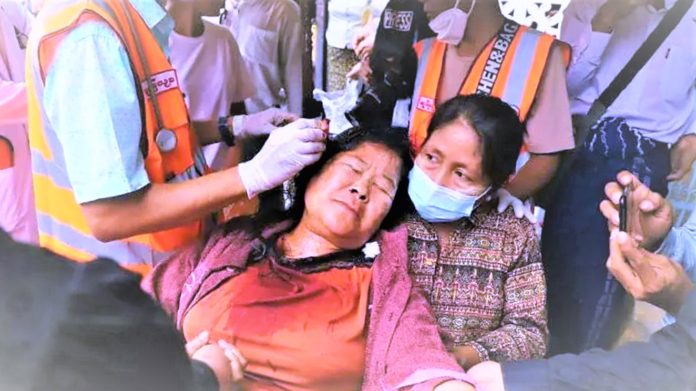 Myanmar protest has intensified and the Myanmar Army is doing every brutal act possible to disperse them. People who are demanding to restore the democracy in the country are meeting bullets.

In the second biggest city of Myanmar, Mandalay, security forces fired live rounds and rubber bullets at the protestors. Two people have died and 30 others were injured as per the new agencies during Myanmar protest.

Most of Myanmar is in uproar after civilian leader Aung San Suu Kyi was arrested following a military coup on February 1 this year. People of the country have decided to march against the Junta government.

Before the killing incident, hundreds of Police and the Army gathered at the Yadanarbon Shipyard in Mandalay. People feared for the worst. Security forces are hunting the Anti-Coup people in Myanmar.  Locals started banging their pots and pans in defiance and started hurling stones. The police fired live bullets and killed two.

Health officials have confirmed two deaths. One person was shot on the head, an under 18-year-old boy. The other was a 36-year-old man who received a bullet on his chest. His wife later told Reuters that she would also participate in the protest now, as she is no longer scared.

The injuries are mostly from live bullets, rubber bullets, and slingshots.

Protestors have demanded China condemn the coup. Many reports, local and international have suggested that Communist Party is meddling in affairs in Myanmar for their benefits. China hasn’t responded to it.