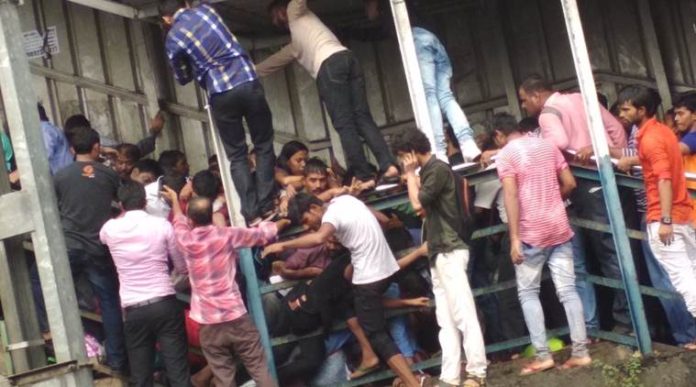 Mumbai stampede shocked the nation on 29th September 2017.  A heavy lashing rain at the peak hours forced people to take the bridge of Elphinstone Station Road. The next ten minutes have shattered the dreams of many families in Mumbai. The torrential rain, the rumour and the short-circuit caused panic among people. There were too many people and everyone was jostling the next person and then the rushing and pushing started. Well, at least 23 people got killed when people came back to their senses.

It was all over within minutes. Now, the question comes, what killed the 23 unfortunate people who were going to work. There are few logical reasons behind it and that must be understood by everybody, people, authorities, and Government.

Apathy of Authorities and Government

There have been at least 100 tweets that have been shared before the tragedy warning of a stampede situation. There have been many concerns for the Footover Bridge in one of the busiest railway stations in the Mumbai Sub-urban area. All day people are crossing the bridge and the numbers are always in thousands. But the bridge is old and can barely accommodate two people next to next. Well, the Ministry of Railways did not really clear the budget for it. The bridge opens on the road and it is so dangerous constructed that flood water can occupy the entrance of it.

The Government was sleeping these many days to fix the issue and was waiting for the disaster to happen. This is not directed to the current Government but to every Government that has ruled both in State and Central.

The scientific reason for the death, however, is the Asphyxiation. The High Density Crowd caused failure of lungs expansion for the people. Few people fell to the ground and died due to the same reason. So, it was neither the panic nor the injury that killed them. Scientifically, they could not have breathed during the Mumbai Stampede and died.

However, that was the disaster waiting to have happened. The ignorance of the authorities during this monsoon has already killed many people and this is the time that they should wake up and stop the game of deaths in Mumbai.