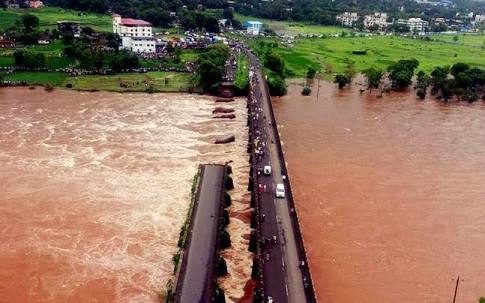 Mumbai Goa Bridge Collapsed today on the Savitri River endangering life of more than dozens. Two dead bodies have already been recovered. The search operation is going on and many people are still missing.

The Mumbai Goa Bridge got collapsed suddenly due to heavy rain since last few days. The bridge was built during the British era and connects the Mumbai and Goa Highroad. Unfortunately there were 10 vehicles on the bridge when it collapsed and the dangerously flowing Savitri River washed away everything.

The Mumbai Goa Bridge was built in the British era. Even though it has remained a key route for the vehicles, Government hardly thought of repairing it. An old bridge was washed off by the river and the rain and now Government is trying to find the bodies. A progressive and proactive government would have ensured the safety of the bridge at first.

The unfortunate incident has raised many questions on the safety of the people and the old constructions. There are many more similar bridges that need immediate attention but the authorities are still sleeping.

If someone can run the Coalition Government of Meghalaya, he is...

Gurmeet Ram Rahim Rape Verdict – Why is it a shame...

Oppo F1 Plus Review – Premium Phone but how effective it...