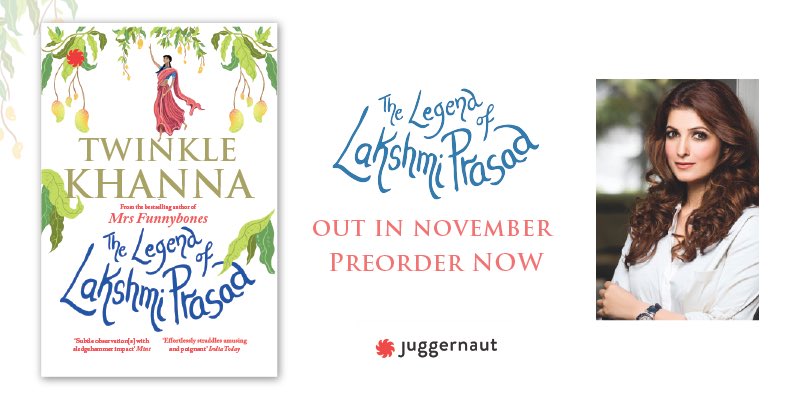 Twinkle Khanna- noted author, interior designer, and popular columnist announced her new book, titled, The Legend Of Lakshmi Prasad, today through her social media accounts. This is her second book, after Mrs Funnybones: She’s Just Like You and a Lot Like Me came out last year and instantly topped the bestseller charts.

Known for her witty one-liners and tweets, Twinkle Khanna had been bogged by fans all over the world to reveal her new book. And, she did do it with a bang! Popularly known as Tina, she took to her social media accounts to announce her book.

She released the cover of her book and wrote on her official Twitter handle: Crossing my toes:) Pre-order Amazon & Flipkart-1st week of Nov.

And also gave out another Tweet that read: My new book of stories that will hopefully make you laugh a lot and sigh a little. #TheLegendOfLakshmiPrasad

Mr Khiladi and loving husband, Akshay Kumar too took to his official Twitter handle and tweeted about his ladylove’s new book. He wrote: .@mrsfunnybones is back with what she does best (aside from making jokes about me) writing funny and wise stories#TheLegendOfLakshmiPrasad

Well, this surely has raised the excitement to an all new level for her friends and fans alike. Published by Juggernaut Books, the book will be released in November this year. Daughter of yesteryear’s superstar, Rajesh Khanna and Dimple Kapadia, Twinkle Khanna is married to Akshay Kumar and are parents to two children, Aarav and Nitara.

Bollywood Clash – Rajni’s 2.0 will evade clash with Ajay and...