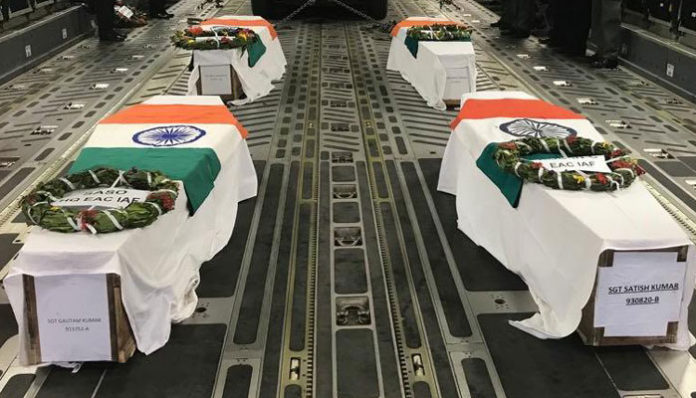 Mi-17 Chopper crash near Tawang, Arunachal Pradesh killed 7 defence personnel including two Indian Army soldiers and five Air Force officials. The initial enquiry suggested that the tail rotor of the chopper fallen off and that caused the accident. All on board had fatal injuries and made supreme sacrifice for the country. However, what worrying is the loss of lives and assets during the peace time and that has been even pointed out by the Air Force Chief.

It's a sad moment for #IAF to confirm loss of Mi-17 V5 #Helicopter along with 07 Defence Personnel, including 05 Airwarriors,Today. pic.twitter.com/5odKsKC8e2

#ArmyCdrEC & all rks salute defence personnel who made supreme sacrifice near Tawang today. Our condolences to the families @adgpi @IAF_MCC https://t.co/QuBAfpzbfs

The Mi-17 V5 Chopper was on its way to Yangtse from Khirmu to supply the Kerosene jerry cans to the army camp of 10 Madras Regiment. However, at around 7 PM the accident happened. The bodies of the soldiers were recovered and they were transported to Guwahati Army base and were given full military honours. However, even in between that another controversy came in when photos went viral that the mortal remains of the soldiers were packed in the plastic bags and the cardboards. However, later Army clarified that this was an aberration as the chopper cannot carry heavy weights in the high altitude and the mortal remains were packed with the local materials. The soldiers were given full military honours in Guwahati and were sent to the families in the traditional way.

Here is the whole story of the coffin row of Indian soldiers.

2. Seven young men stepped out into the sunshine yesterday, to serve their motherland. India.
This is how they came home. pic.twitter.com/rlSbdpJyR4

Seven young men stepped out into the sunshine yesterday, to serve their motherland. India.
This is how they came home. pic.twitter.com/OEKKcyWj0p

Here is how Indian Army has replied to all the allegations.

Mortal remains of heptr accident in HAA on 6 Oct 17 recovered, sent wrapped in local resources is an aberration. pic.twitter.com/NDvEvBo87F

The loss of lives during the peace time is heavy for the Indian Air Force and Indian Army. An enquiry has been set up and it must address all the issues regarding the safety and security. This is not the first incident in the North East of Chopper crash, similar incidents have taken place in recent past and IAF must ensure that Mi-17 Chopper crash accidents are avoided in future.

Gurmeet Ram Rahim Rape Verdict – Why is it a shame...

India targets Pakistan – This time it is Loud and Clear

Kashmir Curfew to be lifted – Government plays the last bid...