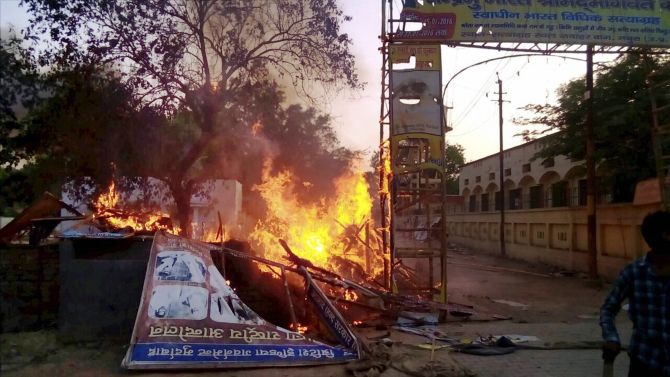 Mathura Clash has now claimed 21 lives as the operation continues. The encroachers have pushed away from the Jawahar Bagh in Mathura. The encroachers believed to be from the Swadheen Bharat Subhash Sena had occupied the 230 acres of Park since last 2 years. Recently, Allahabad High Court ordered to evacuate the park and police came into actions. However, the fight broke out between police and encroachers. The violent fight has killed an SP and SHO as well.

Chief Minister of Uttar Pradesh Akhilesh Yadav has already ordered a magisterial probe into the incident. He has also announced an extra gratia of INR 20 Lakh to the family of the martyred policemen. DGP and Principal Secretary of Home have already reached the place.

Rajnath Singh, Union Home Minister has already reviewed the situation and expressed the concerns over Mathura Clash. BSP, Congress, and BJP have expressed concern over the lawlessness of the situation.

Spoke to UP CM Shri @yadavakhilesh and reviewed the situation in Mathura. I have also assured him of all possible help from the Centre.

Anguished over the loss of lives in the incidents of violence in Mathura. May God gives strength to the bereaved families to bear the loss

The encroachers level themselves as Satyagrahis and have their own set of demand. The demand is that the elections of the President and the Prime Minister should be abolished in India. They even demand of diesel of 60 liters in One Rupee and 40 Liters of Petrol of One Rupee. The situation is still tensed but Mathura Clash is under control. The main leader of the encroachers is now under Police but more details are yet to be revealed.