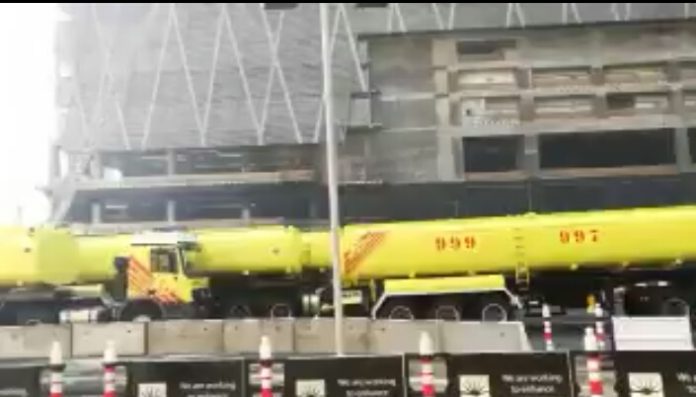 Massive fire breaks out near the iconic Burj Khalifa in Dubai. According to the reports, no causality has been reported so far.

The fire fighters are trying to extinguish the fire and ensuring that no one is trapped inside. In a tweet posted, it has been confirmed that there is no causality. Dubai Civil Defence Team is trying to cool off the event. The high rising smoke can still be seen from the building.

It has been? confirmed that the fire has made no impact on the Burj Khalifa building. However, the security is taking no chance and all the precautions have been made.

The under-construction building has suffered a loss due to the fire. However, exact reports of loss and other damage can only be known after the fire is under control. Once that is achieved there will need to be plans put into place to get everything back to the way it was and start up again. This may take a while as new construction commitments will need to be made. The project team can help themselves by using such software as https://www.rakenapp.com/production-tracking to keep themselves o track for the new requirements and time limits.

Fire at Fountain Views towers has been brought under control; cooling operations are underway pic.twitter.com/QcNoBxEgjv

The reason for the fire has not been revealed yet. However, it is understood that the electric shot circuit could be a reason. The official statement of the fire accident near Burj Khalifa is awaited.

Burj Khalifa is one of the iconic building of the world and is highly protected. An incident like this may cause a panic among people in the tallest building of UAE.