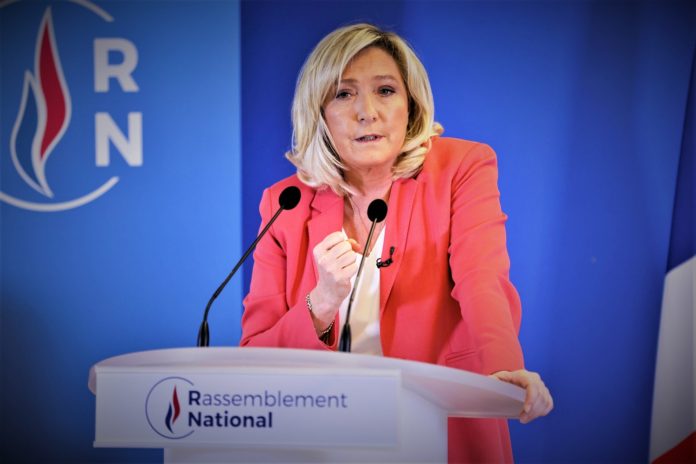 Marine Le Pen is now seen as a strong political force to reckon with. The latest surveys reported that Le Pan is now neck to neck with President Emanuel Macron. The far-right leader who took over from her father, Le Pan is now seeking a complete Hijab ban in France in public places.

The country is 15 months away from the next presidential election and Marine Le Pen is up against the headscarf of the Muslims.

“I consider that the headscarf is an Islamist item of clothing,” Le Pen told reporters at a press conference where she proposed a new law to ban “Islamist ideologies” which she called “totalitarian and murderous.”

Marine has fought two presidential elections, but the last one was a shocker. She faced humiliation in votes against Macron who was a political newcomer in 2017.

But the current trends show she has a 48 percent vote share against 52 of Macron if elections are held today.

What is helping her uprising?

The pandemic is of course not helping the current government. The third-lockdown and the millions of affected cases have created an anti-government sentiment and Le Pan is cashing on that. But would that last for the next 15 months? It may well be if the pandemic continues for another few months.

The latest Islamic terrorist attacks on France and the killing of Samuel Patty, the assistant teacher has helped her come forward again. She is known for anti-EU, Anti-Immigrant, and Anti-Muslim sentiments. The latest attacks on Freedom of Speech in France is actually contributing to her popularity.

Even though the emotions and sentiments are currently anti-government, but Macron has enough time to pull off and actually turn the 2022 election against her. However, with the popularity increasing every day, Marine Le Pan might get her opportunity at the Elysée Palace soon.