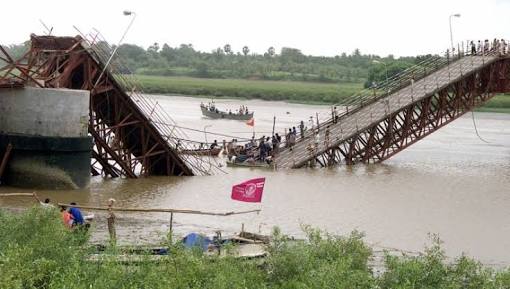 Mahad Bridge Collapsed and that has increased the risk of life loss to an extreme level. As per the latest news, 29 people are still missing and it is very unlikely that they will be found ever again.

The latest news on Mahad Bridge Collapsed suggest that the rescue operation team has not found anything in the Savitri River. The river is swelling with excessive rain and with all possibilities the missing people might have washed away to the Arabian Sea. It has been assumed that the missing people and the vehicles might have washed away. However, the rescue operation is not stopping for the same.


2 dead bodies have been found so far in the tragic incident. Mahad Bridge Collapsed yesterday due to rain and two bushes with close to 23 people fell in to the river. The swelled Savitri River washed them away before any help would have possibly reached.

The Mahad Bridge or Mumbai Goa Bridge was made in the British era and there was hardly any repair job on it. Government is now trying to ensure all facilities to carry out the rescue operation. The family members of the missing people are yet to be informed on the development.

AIADMK Crisis – Last Chance for Party Members to save the...

Dipa Karmakar – Meet the First Indian Woman to be World...