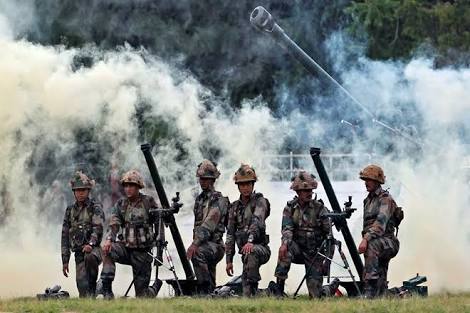 Across Line of Control Surgical Attack by the Indian Army 11 days after the Uri Attack has revealed many things. As DMGO announced that surgical strikes have been conducted, the Indian Media started showing the bravery of the soldiers and Pakistan Media started showing as usual flip flop and then denial mode was activated. Things of the events are very interesting and here are things that have taken place since Wednesday Midnight.

After several days of surveillance, Indian Army troops crossed the Line of Control and entered into Pakistan occupied territory of India. Army went 2-3 KM inside and attacked 8 terrorist launch pads. There were terrorists, guides and planners present in the launch pads who were preparing to attack J&K and other cities of India. The attack took them by surprise and Indian Army destroyed the launch pads. The operation lasted till morning 4.30 AM. As per the initial reports, 38 terrorists were killed over 200 are injured and fled the spots. Some sections are also claiming that 2 Pakistani soldiers were also killed.

The troops came back to Indian territory before the sunrise.

DMGO of India hold a press conference and said what happened across the Line of Control.

Radio Pakistan quoted PM Nawaz Sharif condemning the attack and blaming India for killing 2 soldiers. The Asian Herald reported that in that case what were soldiers doing in terrorists camp?

Pakistan Army soon denied any surgical Attack across the Line of Control. Pakistan media said that the attack is fabricated.

Soon reports emerged that Pakistan is evacuating villagers along the Punjab border between India and Pakistan. This is only done when Army prepares for a war.

Indian media also reported that more BSF Troops have been sent and the Indian villages are also being evacuted.

After the Uri Attack, the surgical Attack across the Line of Control seems prepared both the countries for more tensed situation. It is understood that both the armies are ready for any situation now. However, understanding Pakistan and its policies , it is expected that a Nuclear threat is under way.

Cow Vigilante Group – Women Thrashed Now, is this not terrorism

AAP Delhi MLAs may become one of the Richest

Narendra Modi beats All World Leaders – Another Feather in the...