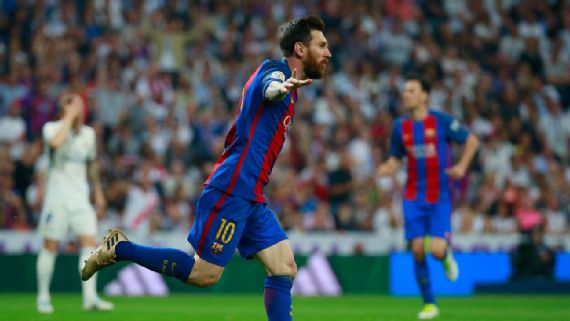 El Clasico has always been breathtaking and La Liga did not miss the same. However, the best part of the Real Madrid vs Barcelona match was the Golden Touch of the Superstar of Football world, Lionel Messi. Messi scored the 500th Goal for the Barcelona to cease the El Clasico 3-2.

Lionel Messi had his chances and he missed many of those unfortunately for the Barca fans. However, he converted two of the most important goals for his team. It Casemiro however who scored the first goal of the first half for Real when he nudged the ball from the cross at the 28th minute. Barca has never panicked when Messi is around, and it took only five minutes for him to score the 499th goal to equalize the scoreboard. It was Ivan Rakitic who gave Barcelona the lead in 74th minute. However, the last 27 minutes were the most interesting for the fans. Sergio Ramos scored brilliantly 3 minutes to later to give Real Madrid the chance to draw the El Clasico. However, they bettered their chance to win in the 85th minute. Substitute James Rodriguez gave lead to Real after Ramos was sent off with a Red Card. The fans were hoping for a miracle for Barcelona to win and there was no better man than Messi to do that on the field. On the dying minutes of the match, Lionel Messi scored from nowhere to win the El Clasico for his team.

Barcelona has now the advantage over Real Madrid to win the Spanish La Liga. Both the teams are however on 75 points with Atletico Madrid at a distant third with 68 points.