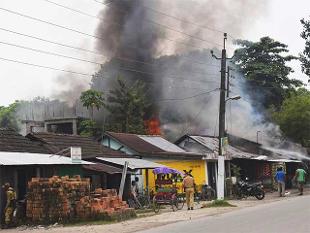 Kokrajhar Terror Attack has killed 14 people. It was initially reported that NDFB or National Democratic Front Bodoland was responsible for the attack. However, things are becoming more complex now. The Minister of Environment of Assam Rani Brahma who is also the sitting MLA of Kokrajhar has raised some serious questions.

As per her statements, the type of attack is not like NDFB attack. In fact, the questions have risen about the mode of operation. The Bodo militants generally kill in different kinds of attacks but this was gunfire in an open market. Interestingly the attack looked exactly the same as the Islamic Attacks on different parts of the world. Rani Brahma has suspected the hands on Jamaat Ul Mujahideen Bangladesh.

Why it can be Islamic attack

There are enough reasons to believe the claims as well. There have been many arrests of the JBM Terrorists since a couple of years. Many attacks have been foiled as well. According to Economic Times, 48 people from Assam have been arrested as JB Terrorists. Kokrajhar Terror Attack came days after it was reported that 5 JBM Terrorists have entered Assam through Bangladesh-Meghalaya border. Police said they are in look out for the terrorists. However, there is no JBM operation and Kokrajhar Terror Attack connection so far.

Why it can be Bodo Attack

It was recently reported that Bodo outfit is slowly taking the form of the Islamic Terrorists to create more effectiveness. However, reports have agreed that Kokrajhar is one of the areas where Islamic militants are active but it is believed that they are still in radicalization state.