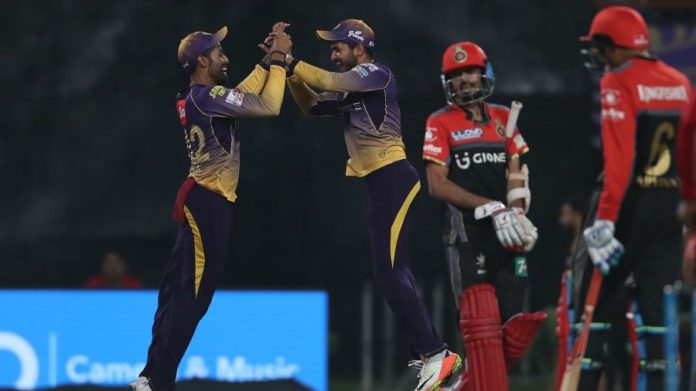 KKRvRCB match was a cracker for the fans. The match started off with a sounding performance by KKR but then remained a one sided performance and swung between the two team. However, at the end, RCB looked helpless and were bundled out for mere 49 runs. KKR defeated RCB by 82 runs as the Royal Challengers
Bangalore was reduced to the lowest ever IPL score in the match.

The batting display from both the team was so terrible that Sunil Narine with 34 runs stood out to be the highest run scorer for the match. None from star seeded RCB team crossed the double digit score. The worst economy of the match was for Stuart Binny of 9.00 who bowled just an over. Kedar Jadhav scored the highest score for RCB and that was only 9 runs. Plenty of records were broken in this match at the Eden Gardens, Kolkata, and most of it were made by poor RCB.

Chasing the score of 132 runs, RCB was bulldozed for 49 in 9.4 overs. KKR needed just 4 bowlers to finish the match.

– This is the second match in IPL history that both the teams were all out in 20 overs. This is a rare scene in T20 cricket.
– RCB has never won a match when Virat Kohli was out for Golden Duck and they maintained the same reputation in this match as well.
– RCB scored the lowest ever IPL score breaking the record of 58 that was between RRvRCB match back in 2009.

Kolkata Knight Riders now look comfortable at 10 points whereas RCB has slipped to the last and it looks difficult to qualify for the team in IPL 2017.

India beats Bangladesh by 208 Runs in One Off Test

GLvKKR – What Was More Special than 10 Wickets Win