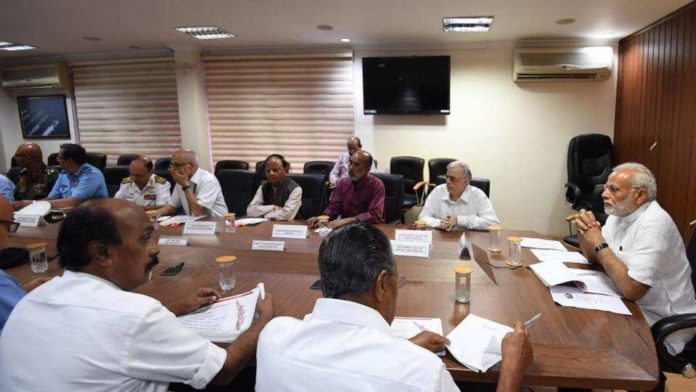 Kerala Flood situation has worsened even today. Reports have emerged of 5 deaths today from Idduki district. The death toll this season has reached almost 350. Prime Minister Narendra Modi is in Kerala and has already attended a high-level meeting with the Kerala Chief Minister and others. Earlier today, Modi’s helicopter could not take off today due to heavy rain in Kochi. It has been reported that an attempt would be made again. However, as of now, Kochi is dashed with consistent rain.

Chief Minister Vijayan had appealed to the countrymen to support in Kerala. The Politicians from all parties have come together in the rescue operation. The authorities are facing the tough situation as the flood situation is worsening. Indian Navy has already supplied 8 Lakh Liters of drinking water. Over lakhs of families have been shifted to relief camps due to the flood. A 21 wagon train will also be sent carrying 7 Lakh liter drinking water from Pune for the relief work.

As the rescue work in going on full swing, Indian Navy has been deployed in the Chengaur for emergency relief and rescue work. Congress leader PC Chacko of Kerala has appreciated the efforts of the centre so far but insisted that more needs to be done in the wake of the situation.

It is expected that 4 Lakhs of People have to be shifted to the relief camps. The army might be called for the rescue operation as the situation is slowing moving out of the grip believes many.

Kerala Flood is the worst in 100 years and every Indian must come together for the grave situation. One can donate in Kerala CM fund. You can contact the NGOs that can deliver the material to the needy. One can visit Amazon and directly donate the materials required for the flood victims.