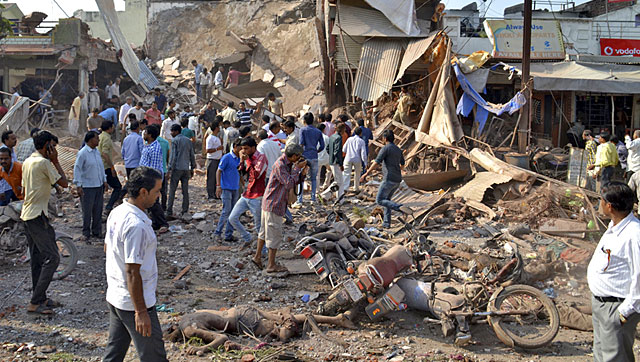 It was a normal day morning for the people in Jhabua, a small town in Madhya Pradesh District in India. However, everything got changed and shaken within few minutes in the popular market place. An earth shaking blast in a shop took away 104 lives (present figure of causality) and injured many more. If you have made up your mind to think that another deadly terrorist attack has hit India, then you must know that it is not. The blast has happened due to the presence Gelatin Sticks in the shop which experienced short circuit on the fateful morning.

The intensity of the blast has indicated the gelatin stored in the shop. The shop was located at a popular market and just beside a restaurant. The immense blast initially indicated the cylinder blast in the nearby restaurant which caused bodies to fly. Well, that was not the case, as Police of Jhabua District later confirmed about the Gelatin. The shopkeeper is on the run and has been booked by the police. The gelatin sticks are mostly used for the mining purpose in the center region of India. This has again raised serious questions on the authorities on the illegal mining. Police has confirmed that house of the shopkeeper has been sealed and a special investigation team has been set up to monitor the case.

The Government of Madhya Pradesh has already expressed grieves and Chief Minister of the State has announced INR 2 Lakhs for the dead people and an additional INR 50000 for the injured. But the incident wants more than compensations from the government and authorities.

How can a person keep gelatin sticks at a market place knowing that these are explosives? Where was the negligence and who was responsible for it? Was it the only shopkeeper or the administration? There are plenty of questions to be answered by the authorities and take strict actions on the same. The bloodied dead bodies of people that were dusted or turned to ashes by the mere explosions need focus. Yes, it may not be a terrorist attack on a small town of one of the Asia’s strongest economy, India but negligence has played even more severe role than terrorism.