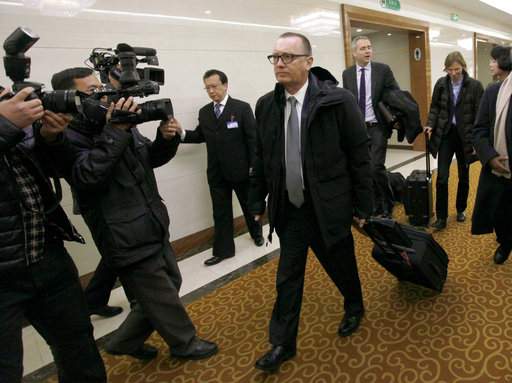 Jeffrey Feltman, a UN Convoy has arrived Pyongyang amid tensions in the Korean Peninsula. The visit would have a huge significance to stabilize the fragile Korean Peninsula. The visit came after few days of soaring tensions. North Korea once again fired a ballistic missile that is capable of reaching the mainland of the United States. It happened less than a week ago. A Cathay Pacific Crew claimed that a missile was spotted while from the US to Hong Kong recently that looked like a missile trying to re-enter the atmosphere. The crew described the event as the missile blew up and the fell apart. If it was not enough; the US and South Korea held the biggest drill soon after that. The drill involved at least 230 Air crafts, stealth jet fighters and tens of thousands of soldiers as preparation for the provocation. Amid all the chaos, the UN Convoy reached the Capital of North Korea by Air Koryo from Beijing, China. He was greeted by the Foreign officials of North Korea. But what will be the outcome and what should be discussed at the meeting? Well, there are a lot of things that should appear as Jeffrey Feltman visits the North Korea for the first time after assuming the chair at the United Nations.

North Korea would probably persuade the ambition of full Nuclear Statehood and then come to the talking terms. They may say that the Nuclear power would only be used for the defence purpose. However, an assurance of “No First Policy” cannot be expected from the defiant communist state.

China wants 2-3 things in this whole chaos. China is the only diplomatic friend of North Korea but has pushed sanctions recently. China does not want North Korea to continue with the Nuclear Program. On the other hand, it is also persuading to stop the military drills of the United States and South Korea. THAAD implemented in South Korea is also a threat to the Chinese and they certainly do not want it.

The UN Convoy Jeffrey Feltman needs to talk about the mutual interests regarding the North Korea issue and must push forward something to de-escalate the tension.