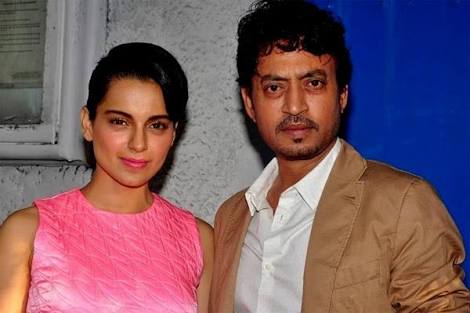 Irrfan Khan trolls Kangana Ranaut in front of the people with his always charming and hilarious approach. Irrfan is known for his statements and this time, he trolled Kangana, even though she didn’t say anything wrong.

Kangana recently said that she wants to do a movie with Irrfan Khan. She even mentioned that it does not matter if the role is small but she would love to feature alongside one of the most popular and highly talented actors. Bollywood Bubble reported that Irrfan Khan was asked for the reply. He was constantly asked that whether she would love to work with Kangana Ranaut. But Irrfan Khan dealt the situation in a way that no one can imagine.

Irrfan just picked his phone and started pretending to call Kangana and then immediately said that she says “No Comments”. Well, he was not left so easily and asked for a comment on it. Then he delivered the gold. He said that of course he would work with her. However, he thinks that Kangana should play an equally important role not a small role and she deserves it all. He went to say that if the importances of the roles are equal then only, it will be fun to work. However, he then added that as far as the Small Role is concerned, it might have meant for him in her movie.
Irrfan Khan will be soon seen in Bollywood Movie Madaari and Hollywood Flick Inferno alongside Tom Hanks.

Amy Jackson to come together with Salman Khan! No Not in...