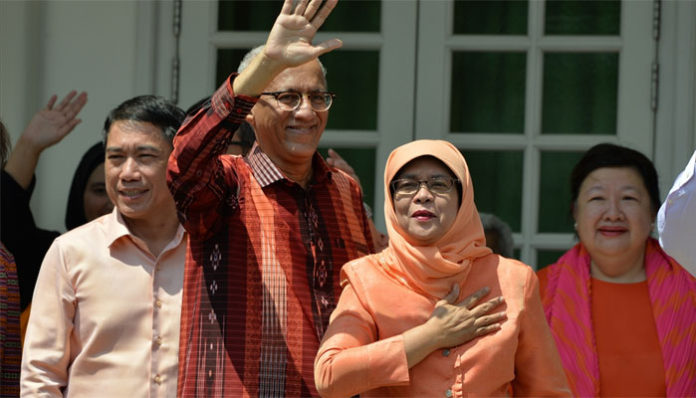 Halimah Yacob, the newly chosen President of Singapore has an interesting tale attached with her. She has a political background behind her and her post of President would mark the final nail on her rather successful career. Her elevation to the President’s post, however, has been opposed by many, considering she was not elected. Yes, there were three candidates running for the prestigious post which is more of representational rather than the execution. However, other two candidates did not meet the criteria and she was automatically chosen. She will be the first woman president of Singapore and the ceremony of her presidency would be on Thursday in Istana, the Presidential Residence of Singapore.

Halimah Yacob ran for The Presidency under the reform of constitution in 2016. The Singapore reformed the constitution and it was ruled that the post would be reserved for an ethnicity in case, none from that has assumed the office in the last 30 years. This year it was for the Malay ethnicity to become President. President Elect Yacob along with Mohamed Salleh Marican and Farid Khan ran for the Presidency.

Yacob was born in 1954 to an Indian origin Father and Malay origin mother in a Muslim Family. She joined active politics from the People’s Action Party and entered Parliament for the first time in 2001. She assumed the Ministry of Community Development, Youth, and Sports in State. In 2013, she became the Speaker of the Parliament of Singapore. She stepped down from the post last month to qualify for the post of Presidency.
Halimah Yacob has greeted her supporters and told that she is the President of all and people must focus on the similarities that the multi-culture Singapore has, rather than the differences. She believes that the country is yet to reach the peak as she assumes her post tomorrow.

Rodrigo Duterte Mass Murder – Is it the same as Cambodian...

Cash Withdrawal Limit to change – Will it be a Happy...